Famitsu, one of the prominent Japanese gaming magazines, usually reaches consumers on Thursdays, but most of the time–thanks to ninjas or something–a lot of the important information leaks days in advance.

Just earlier today, Famitsu posted online that their upcoming issue would have a feature on Fire Emblem if, with plenty of new information; hours later, we now know a lot more about Fire Emblem if that we did before. 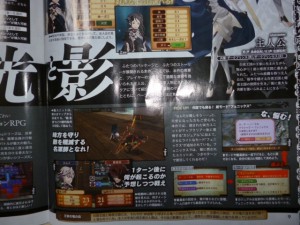 To begin with, perhaps the biggest news–and the one sure to create heated discussions amongst fans–is the introduction of a brand new mode, Phoenix Mode, where fallen characters are resurrected immediately on the next turn.

Before picking one of these modes, players can start the game on the Normal, Hard or Lunatic difficulty settings, just like in Awakening. Unlike that game though, there is the option to change your difficulty and mode mid-game, although it seems this change is irreversible.

Players who want to try a variety of difficulties and/or modes will be glad to know the game supports up to 9 save files. Each extra campaign (Hoshido, Nohr and the third route) is said to add 3 extra save files, so it’s likely you start with 3 save files like in Awakening.

Another radical change, although this time apparently not an option, is the removal of the weapon durability system. This change was already observed in previous screenshots, but at the time it wasn’t formally confirmed. 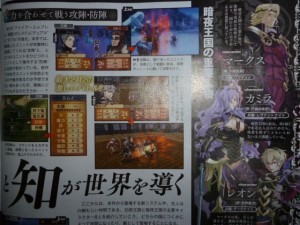 This was briefly discussed previously, but the Dual and Pair Up systems introduced in Awakening have been reworked slightly. It is difficult to tell from the small magazine images, but it seems two friendly units can adopt an Attack Stance or Guard Stance.

An Attack Stance occurs when a friendly unit is adjacent while attacking an enemy; the friendly unit will launch a follow up attack after the main unit attacks (i.e. Dual Strike). The Guard Stance, meanwhile, has two friendly units combining together, boosting the stats of the main unit (i.e. Pair Up).

Other than the different names, it’s unclear how exactly these stances differ from their Awakening counterparts. Curiously, characters have a “shield” gauge, which may be related to their ability to deflect enemy attacks while in a Guard Stance.

There’s also a tiny update regarding the optional battles in the Hoshido campaign (which aren’t in the Nohr campaign). It seems players must pay a fee (using in-game funds) to initiate a skirmish battle–a bit like purchasing Reeking Boxes in Awakening. 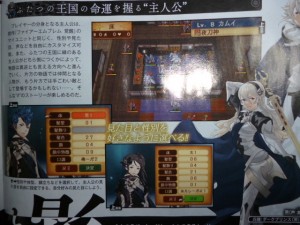 The rest of the information is about the characters, starting with the Avatar. Like in Awakening, players can customise their Avatar’s name, gender, appearance and voice. By default, he/she starts in the Dark Prince or Dark Princess class.

In addition to the usual appearance choices, such as build, hair, hair colour and face, players can also select hair accessories (female only?) and facial features. The selection seems to be larger than previously too, with at least 27 hair colours to pick from, rather than 20.

This particular detail hasn’t been confirmed, but it seems the blue-haired songstress, Aqua, may be in a similar but reverse position as the Avatar. According to reports, she is the princess of Nohr taken prisoner by Hoshido. If you recall, the Avatar is the prince/princess of Hoshido raised by Nohr. 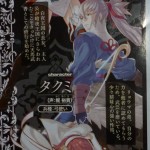 The magazine then briefly introduces the eight royal family members from Hoshido and Nohr.

On the Nohr side, we learn that Marx is a Paladin, Camilla is a Revenant Knight, Leon is a Dark Knight and little sister Elise is a Rod Knight.

As for the Hoshidans, Ryouma is sadly off-screen, Hinoka is a Pegasus Warrior, archer boy Takumi is a Bowman and Sakura is a Priestess.

Unfortunately, there has been some minor confusion because the English Nintendo Direct wasn’t very good at conveying this, but the eight characters are all the Avatar’s siblings (adopted in the case of Nohr). 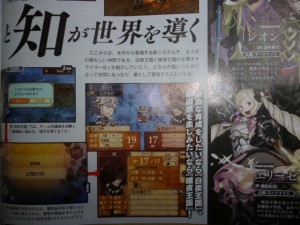 It seems the Avatar isn’t the only person able to wield the “Dragon’s Vein” ability; apparently all the royal members have this ability and they can use it to create bridges, flatten mountains, cause earthquakes and other effects.

Again, the magazine images aren’t very clear, but it seems Hoshido and Nohr both revere the “Divine Ancestral Dragon(s)” and, in particular, the royal family members possess the blood of dragons. Because of this, they possess exceptional abilities.