Having struck midnight, it’s now Thursday in Japan; the day the latest issue of Famitsu officially comes out. Although most retailers probably aren’t selling the new Famitsu this late at night, for those of who can’t wait there is the digital version… 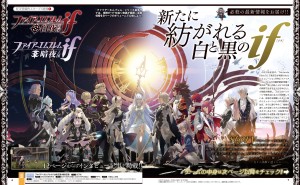 Yesterday, most of the important Fire Emblem if information already leaked, which means there aren’t any real surprises. That said, the Fire Emblem if section spanned 8 pages and we only saw roughly 1 and a 1/4 pages, so there are plenty of new and interesting tidbits.

Firstly, a bit more on the predictably controversial Phoenix Mode, where fallen allies are resurrected on the next turn. As we learned earlier, Phoenix Mode sits alongside Casual and Classic Mode and, like those two modes, is independent of your difficulty choice.

Interestingly, the game even describes it as a mode where your allies cannot die. The developers stated that Phoenix Mode was invented to sway players interested in the game, but concerned it was too hard for them.

In particular, this could be an issue during the Nohr campaign, where you can’t train outside of the story. During these situations, players can lower the mode and difficulty mid-game, rather than starting again from scratch. Going back up to Classic Mode is not possible though.

The developers were also quick to confirm that playing on Phoenix Mode offers no gameplay disadvantages, such as locking out specific endings or anything like that. Rather, beating Classic Mode is meant for the feeling of accomplishment 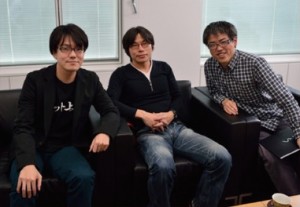 Durability may be gone, but these guys are confident they can make weapons matter.

The other radical change was the abolishing of weapon durability, something only previous seen in Fire Emblem Gaiden on the NES. Although durability is gone, the developers have tried to make players think hard about which of the various weapons they should use in a given situation.

For instance, some weapons may reduce the enemy’s critical rate, while others may be extremely powerful, but difficult to attack twice with. There’s also the fact that Hoshido and Nohr seem to have their own set of weaponry (eg. swords versus katanas), which could tie into this. 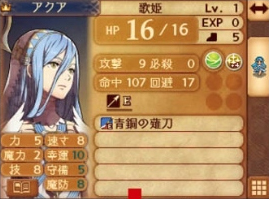 Aqua also has Luck +4, a Dancer skill in Awakening.

With those hot topics behind us for now, there was a spicy rumour about the heroine, Aqua, which we can now confirm to be true. Similar to the Avatar, Aqua was originally the princess of Nohr, taken prisoner by Hoshido. The circumstances of her capture are unknown, but it does raise a lot of questions.

On the subject of Aqua, we finally see a glimpse of her as an unit. Unsurprisingly, given her role, her class is Songstress and she has the ability to Sing to allow allies to move again (like Dancers in previous games). In the screenshot above, she is wielding a Bronze Naginata, a Hoshidan lance.

Besides Aqua, Ryouma kept us hanging as well, due to being inconveniently cut off in the leaked images. We now know that Ryouma is of the Trueblade class, although before you get too excited, this is more likely a renamed Swordmaster than a 3rd Tier class. 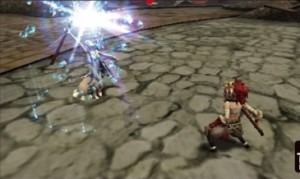 Linca on the right is probably a female Oni.

Other classes include Nohr’s Sorcerers, who excel in Magic, and Brave Heroes, renown heroes who wield swords and axes (likely renamed Heroes). The Hoshidans meanwhile have Oni, fierce mace-wielding warriors with high strength and defence and Priestesses, maidens who heal with batons.

That’s almost everything of note, but there are a few nitty gritty things.

Like Awakening, Fire Emblem if supports all of the 3DS’s communication functions: SpotPass, StreetPass, Local and Internet. Sadly without context, this information is a bit useless; for instance, “Internet” is at least used for downloading DLC, which we already knew about. 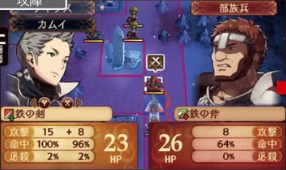 Sadly, this character’s name is obscured.

In one screenshot, a character is teaming up with Kamui to fight a “Clan Soldier“. Thus far, we’ve only seen two different factions (Hoshido and Nohr), so it’s good to know there are other factions too. Although the enemy seems like a typical barbarian, the fact it’s a “soldier” suggests it’s from a more complex organisation. 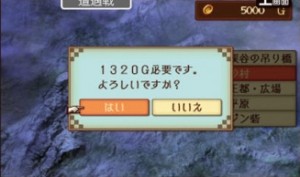 When initiating an optional battle in the Hoshido route, players can select from a list of locations, such as a suspension bridge, mountainside village, royal capital plaza, grasslands and a fortress. Now this could just be an innocent, handy shortcut to quickly get straight into battle.

On the other hand, what if this is a sign that Hoshido doesn’t actually have a traversable world map? After all, the developers never explicitly said Hoshido had a world map–just that it has a “world map-like” system where players could train outside of missions.

Anyway, that’s everything I could gleam. At the end of the feature is a 2 page interview with three key members of the development staff, which Kirokan has kindly translated here.

As always, feel free to check out our forums for the latest happenings or check out Famitsu’s Fire Emblem if feature yourself, below…