Nintendo avoided the subject in their E3 trailer, but now we know that Fire Emblem Fates will be releasing as two separate versions in the West, like in Japan. 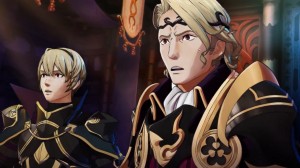 In their official press statement, Nintendo states this:

Fire Emblem Fates: Two versions of the franchise’s new installment offer players an unprecedented choice: fight an opposing force or join the other side and try to make changes from within. For the first time in the series, players take on the role of the main character and command an army, while struggling to decide which path to follow: helping blood relatives or the family that raised him or her. The game is scheduled to launch in 2016.

Furthermore, poking around in their official E3 site reveals the two versions’ subtitles.

Fresh from the Digital Event, check out the new trailer for Fire Emblem Fates: Birthright & Conquest.

By the way, in case you missed it, Nintendo’s Treehouse Livestream is about to cover Fates in a matter of minutes of this post!

Update: The Fates Treehouse coverage is over for now; I will report the details after I take a brief break…