Back in May, Shouzou Kaga–the creator of Fire Emblem–announced that he was developing an indie strategy RPG using the SRPG Studio software, which he would release for free once complete. 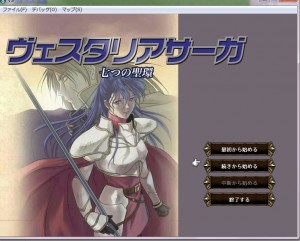 At the time, Kaga mentioned that he would post updates about his game on his blog should significant progress be made–and it seems his project is going relatively smoothly as the first update is now available.

The game itself is currently known as “Vestaria Saga: The Seven Sacred Rings“. The name, along with the logo, is very reminiscent of Kaga’s first independently-developed title, TearRing Saga.

Not just that, but the game seems to be based on one of Kaga’s earlier prototypes, “Vestaria Chronicle 687-693”, which he discussed in February. Even the world map looks the same. 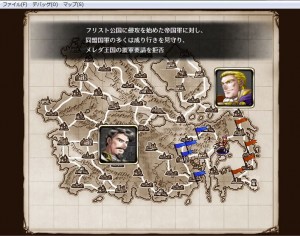 According to the credits, Vestaria Chronicle was developed during 2010, 5 years after Berwick Saga. However back then, it seems Kaga didn’t have the means to implement the strategy part of the game.

As for the current game, from the available screenshots, its gameplay looks to be a mixture of Fire Emblem’s tile-based system, combined with Berwick Saga’s large and diverse maps.

Curiously, the character portraits are taken straight from TearRing Saga’s massive pool of unused characters. (One has to wonder if TearRing Saga was meant to be a much bigger title than it already is…)

At the end, Kaga remarks that he’s been enjoying the challenge of creating a game using a commercially-available software and that, if things all go to plan, he’ll release a trailer around August, possibly on NicoNico. 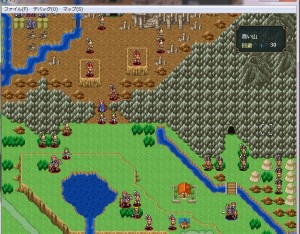 Although Kaga seems confident in general, he’s worried about his small team of elites becoming exhausted over the hot Summer. As such, he’s still looking for 2 or 3 followers to assist him who:

(Obviously, knowledge of Japanese would be a massive plus–if not a requirement.)

In addition, Kaga is apparently having trouble acquiring a character designer. From the looks of things, his ideal candidate, a certain “Miss. H” (i.e. Mayumi Hirota) hasn’t responded to his request, so he’s at a slight loss.

For his project, Kaga requires 100 character portraits drawn in a 96 x 96 pixel space; he states that he’s willing to pay for a character designer (so long as it’s not too expensive), and requests for anyone interested to contact him, ideally before Autumn.