Before I hand over the baton to Elieson, I’d like to present one final article (which I’ve been planning in my heads for ages). 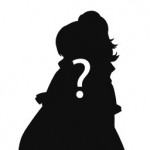 Nearly 3 months have passed since Fire Emblem Fates launched in Japan and while we know pretty much everything about the game now, there are plenty of mysteries that evade us still.

First, a bit of background information. Thanks to recent “technological advances”, as soon as Fates came out, it was easily possible to delve into the game’s internal files to retrieve all sorts of information (aka data-mining).

So while most fans were busy playing the actual game, a handful of dedicated data-miners (such as SciresM) were pulling stats, dialogue, music and graphics, often before anyone has played up to that part of the game.

Note: Because of the nature of this topic, there will be unmarked spoilers. Please continue at your own risk!

Eventually, players finally catch up with the data-miners and things found in the game files are seen by somebody or other. But in a few cases, there are some things players still haven’t seen yet–and these are the mysteries I’ll be discussing. 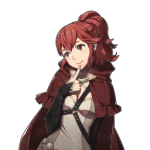 The most well-known mystery has to be Anna, the Secret Peddler. Like in Awakening, Anna is a fully playable character, with proper dialogue and a backstory, and of course the ability to marry the Avatar.

This time, she starts off as a humble Outlaw (Fates’s version of the Thief) and has the same appearance as the Anna who manages Fates’s other-worldly Dragon’s Gate.

Trouble is, while we know virtually everything there is to know about Fates’s Anna, we don’t know how to… er… recruit her. 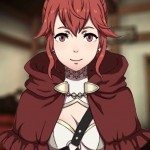 Anna is fully ready for skin-shipping too.

In many aspects, Anna serves a similar role to Priam during the early days of Awakening, as the final playable character who nobody knows how to obtain; her silhouette even appears in-game in the Avatar’s support options just like Priam.

The similarities end here though; Priam and the other SpotPass characters from Awakening were recruited in special chapters that required SpotPass to unlock, but those chapters were already in the game.

Yet within Fates’s game files, there are no signs of any chapter where Anna appears. 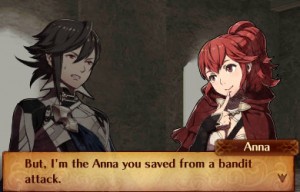 Adapted from an anonymous (but verified) translation.

That said, it does appear Anna is recruited in a map of some kind, as her second support conversation with the male Avatar mentions her being rescued from bandits–a situation not too dissimilar to Paralogues 2 and 4 of Awakening.

So if Anna is to be an obtainable character (which is extremely likely since her silhouette is visible, plus there’s no way the developers would waste all the assets created for her), perhaps she’ll be the reward of an unreleased DLC map?

My guess is that maybe she’ll join in a free DLC map like “Encounter with Awakening” or even an “Apotheosis“-style final DLC map (last time, Anna was the final DLC boss after all). 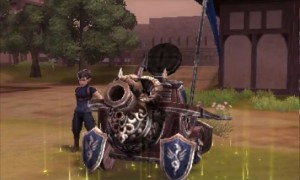 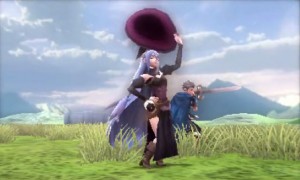 (Credits to Linkmstr for the footage.)

Almost as well-known as Anna are the two legacy Fire Emblem classes: the Ballistician and Witch, from Shadow Dragon and Gaiden respectively.

Unlike Anna, however, there are no clues during gameplay that hint of these two classes’ existence, but lo and behold both are fully functional and come with their own unique set of skills and abilities.

The male-exclusive Ballistician is a mobile tank (yes, these existed in Fire Emblem) that can attack enemies from afar, while the female-exclusive Witch is capable of teleportation magic.

Similarly, there are several currently-unreleased skills (and skill tomes to teach these skills to characters).

Below are all of these skills (with the the “Drain” skills omitted to save space) and some of the skills may be familiar to Awakening fans who bought the DLC.

In Awakening, many DLC maps awarded new classes or skills upon completion, so perhaps the Ballistician, Witch and skill tomes will be rewards in future DLC maps as well.

However there’s a small wrench in the works, as the first wave of DLC has already released.

By Awakening’s DLC schedule, all the new classes and skills were obtainable in the first wave. Whereas Fates’s first wave simply allows easier access to currently available classes or abilities. 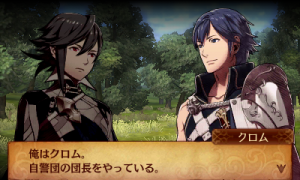 Fates’s DLC is a mixture of fanservice and utility.

Logically, if Ballistician and the like were DLC rewards, they ought to be rewards in the first wave, to cash in on the tidal wave of hype. Because after that, there will be a lot less fans still eager to continue playing the game or pay for additional DLC.

Or maybe the developers are reversing the strategy? By delaying the new content to the second wave, which usually sells less, this could create more incentive for fans to invest in the second wave, therefore reducing the drop-off in DLC sales.

What if it’s something even more different than that? Unknown to most people, there is an unused list of rewards in the game, after the Visitor and Battle Rank rewards, that contains a lot of very familiar items…

So far, nobody knows what this list is for or how to access it, but if it’s related to some kind of new content reward system, that would solve most of our mysteries in one go.

Could it be that the second wave of DLC doesn’t give players rewards outright, but instead increases their “Bond Rank”? Then players can obtain the new class-change items and skill tomes as they increase their Bond Rank. 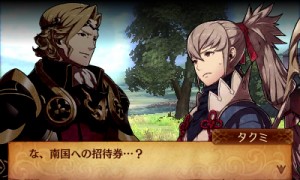 As a matter of fact, the “Scramble” DLC maps in Awakening were known as “Bond” maps in Japan–could this be related to anything? (Amusingly, “Paradise Scramble” in Fates seems to be based off the English naming scheme.)

By the way, I’ve mentioned a “second wave” of DLC a number of times now, but some of you may be wondering… will that even be a thing? Actually, a second wave hasn’t been officially confirmed, but the signs are all there. 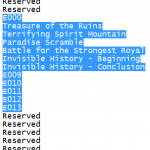 First and foremost, included within the existing DLC is a “secret” list of DLCs; in this list, as well as entries for all the existing DLC, there are reserved slots for at least 5 additional DLCs (see E009 to E013).

Secondly, the Awakening DLC in Japan was released in two waves–the first one focused on battles with legacy characters and utility, while the second focused on fanservice and challenges. So there is precedent for dividing the DLC.

Lastly, each Fates DLC is given a difficulty rating, with the hardest DLC “Battle for the Strongest Royal” being 4-star. Going back to Awakening again, its DLC included 5-star and even MAX-star maps, so we should expect at least one 5-star map in Fates.

(Plus all the circumstantial evidence outlined above.)

Finally (for now), something that’s slightly different to the rest.

Every playable and major character (as well as Dragee, above, and Nacht) has a critical cut-in portrait, used when activating critical hits or special skills. Normally, only characters who physically appear in battle have one.

Initially, there was some slightly confusion as Mikoto and Sumeragi have a cut-in portrait, despite both being dead characters in the story. As it turns out, they are later revived as bosses in the third route, Invisible Kingdom.

Yet there’s one character who’s cut-in portrait cannot be explained: Lilith in her human form.

Initially thought to be a boss in the (as of present time) final DLC “The Invisible History“, where she plays the role of villain, I’ve been told that at no point in the game does she appear in battle nor is her cut-in portrait used.

Only two explanations come to mind. Perhaps Lilith’s cut-in portrait was planned for use, but the developers couldn’t fit it into the story, for whatever reason.

Alternatively, maybe she’ll appear again later, in the second wave of DLC or otherwise, either as a boss or even a playable character? Could she be the final DLC boss, instead of Anna (who’s now a lowly Outlaw)? 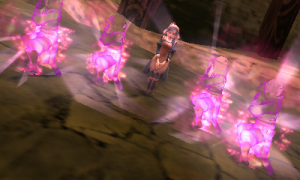 Lilith in The Invisible History.

The main worry with Lilith is that, unlike Anna, she doesn’t have any unit data for her human form (that I can find), so her inclusion is far from a guarantee.

But if the Cipher characters (Lucina, Marth and Minerva) are any indication, it wouldn’t be terribly difficult to add her as a guest character at least (and frankly she deserves a spot).

Anyway, most of this information is nothing new, but hopefully it was interesting to see it all together and explained. Well, that’s it from me; I’ll see you all later!