On Friday, Gamespot checked out the English build of Shadows of Valentia at Nintendo’s PAX East 2017 booth. You can find their preview, which includes a couple of new English screenshots, over here.

Of note, the author commented about the lack of a weapon triangle, which some fans already guessed, due to the game sticking close to Gaiden‘s mechanics. That said, there will apparently be other ways to gain an advantage in battle.

There was also mention of “no support system during battles”, which has gotten some worried about the absence of support conversations. While we still have no information about this subject, this line was likely referring to Pair Up and Tag Team.

Otherwise, we got more confirmation about Archers being able to attack (or at least counter-attack) at melee range and spell-casters expending HP to cast spells. All things you could deduce from analysing recent screenshots.

If anything, it’s the screenshots included in the article that are the most interesting. 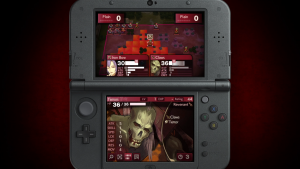 The first screenshot shows a purple-haired Archer (possibly Leon) attacking a Revenant. It’s slightly difficult to see, but the Archer has the full 1~5 attack range after moving with an Iron Bow equipped.

This means it should be possible to initiate an attack at 1 range with a bow, not just counter-attack. The other thing is that Iron Bows, like Iron Swords, did not exist in Gaiden. Their inclusion should make the leap to Steel weapons more natural.

On the bottom screen, we see the stats of the Revenant, which are exactly the same as their base stats in Gaiden (see “Zombie”). The name of the enemy is “Terrors”, which is likely the localised name for “Monster”.

Update: Forgot to mention the “Tec” stat in European/Japanese screenshots has been renamed to “Skill” in these screenshots. Although there’s a small possibility that the European version will retain “Tec”. We’ll just have to wait and see!

Along the right, we have the Revenant’s equipped weapon (Claws) and family type (Terrors). The latter is important since some weapons and spells (namely Angel) are effective against monsters.

In the bottom-right corner is a curious “clock” symbol with the number 3 next to it. Right now it’s greyed out, but it’s accessible when Tobin is selected later on. Could this be related to the calendar system on the world map? 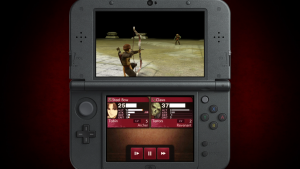 The second screenshot shows Tobin (and not the purple-haired Archer) attacking a Revenant. By itself, it’s not particular notable, but if we focus on the bottom screen a little… 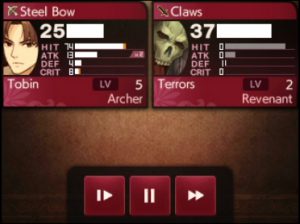 We missed this earlier, but Tobin’s Hit Rate and Critical bars have a small red portion towards the right, which implies a boost. In the Fire Emblem Direct, a similar boost can be observed when Alm goes to fight.

What’s important is that right before Alm attacked, a character’s portrait could be seen in the combat forecast. Putting two and two together, these boosts are likely the effect of a support system, like the ones found in earlier Fire Emblems.

Especially since Hit Rate and Critical are common boosts for such support systems. However, it’s unclear if these supports will have conversations attached–as the supports in Shadow Dragon did not, for example. 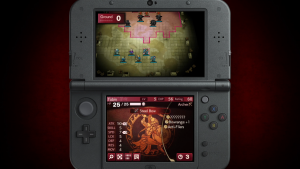 We’ll skip to the fourth screenshot, which shows Tobin’s status screen. Zoomed in…

Along the right we see three attributes: Unknown, Bowrange +1 and Anti-Fliers. This–along with the Steel Bow along the middle–tells us that the area on the right is reserved for attributes and not multiple equipment (barring generic weapons).

As for the attributes themselves, Bowrange +1 appeared in Famitsu and seems to be the Archer’s passive skill. Meanwhile Anti-Fliers is new and may arise from equipping a non-generic Bow, such as the Steel Bow.

The “unknown” attribute is the most intriguing, assuming it’s not a placeholder from a beta version. Our guess is that it could be a skill that’s in the process of being learned. If you look carefully at the Steel Bow equipped, you can find a gauge under the weapon icon. 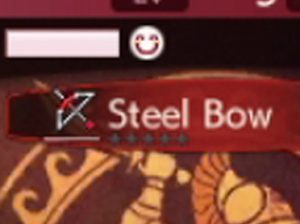 Meanwhile to the right, underneath the “Steel Bow” text are 5 greyed out circles. Assuming the gauge isn’t the weapon durability, perhaps you can “level up” weapons by using them often and learn skills by filling a certain number of circles?

Since Gaiden played very similar to a traditional RPG, we could totally see this being a thing. Anyway, hopefully we find out more soon.

The other thing of interest is Tobin’s stats. Most likely, these are the stats of the Level 5 Tobin attacking in the 2nd screenshot. To begin with, it seems like his Steel Bow is giving him a +3 Attack and -3 Speed modifier.

The Steel Bow in Gaiden had 3 Might, which is consistent with the +3 Attack. Perhaps weapons now directly modify the Attack stat, similar to in Fire Emblem Heroes. The -3 Speed is new, but could function as the Steel Bow’s “weight”.

Originally, the Steel Bow had a Weight of 1, but perhaps it’s been re-balanced due to the inclusion of Iron Bows and Steel weapons generally weighing a ton in newer games. 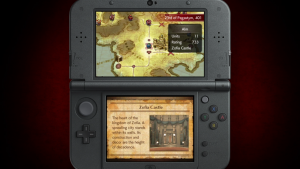 Screenshot number 3 shows Alm at Zofia Castle, around the beginning of Chapter 3 of Gaiden. At this point in time, Alm has 11 units, which is the same as his party in Gaiden plus Effie, the mysterious female Villager.

This trend goes way back and includes hilarious situations like the Black Knight’s sword being “Ettard” in the Japanese version and “Alondite” in the English version, then Intelligent Systems added a new Alondite for Ike in Radiant Dawn.

Anyway… The next point of interest is the calendar system, which we still have no idea what it does. Here, it’s the 23rd of “Pegastym”, which is the localised version of “Pegasus Season”. Of course, since “Pegasus Season” wouldn’t fit in the text box.

There’s also a really cool profile of the current location on the bottom screen. Hopefully this extends to all locations, as it would really help to flesh out Valentia more. 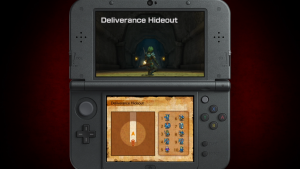 At this point, we’ll jump straight to the final screenshot, since it makes more sense that way. Here we have Alm entering the “Deliverance Hideout”, the localised name of the “Liberation HQ” from Gaiden.

In the new trailer released on the same day, Celica suspects that Alm is leading the “Deliverance”, which we can now safely assume is the new name of the Zofian Liberation Army. Which is a nice change since “Liberation Army” is a very generic term nowadays. 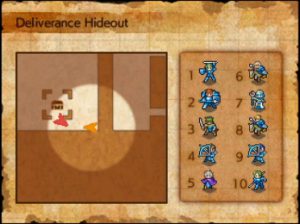 The bottom screen (which we’ve taken from a different, but similar screenshot) is particular interesting since it shows more of Alm’s party.

At this point, he has his starting gang (which now includes Effie) plus the three members of the Deliverance and Silque the Cleric.

From appearances, it seems the player has made Gray a Mercenary, Tobin an Archer, Kliff a Mage and Effie a Cavalier (or swap Gray and Kliff around).

At the moment, Clair, Clive’s Pegasus Knight sister is missing. Obviously, it’s possible the player just dropped her since there’s only space for 10 out of 11 units right now. That or he/she missed her (if it’s even possible). 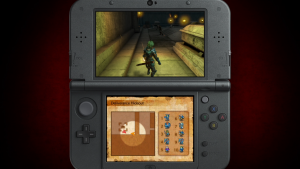 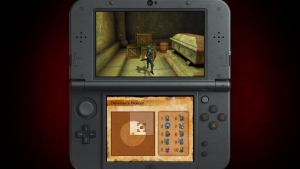 Finally, the last two remaining screenshots show Alm wandering around the Deliverance Hideout. While we don’t get to see the outcome, it seems to show Alm striking one of the destructible objects mentioned in the Gamespot preview.