Earlier, Fire Emblem Echoes information from the 30th March 2017 issue of Famitsu started leaking. Now that the issue is officially in the wild, it’s time for us to bring out the magnifying glass once again! (Whoa, twice in one day.)

Note: A big thanks to Famigeki for the Famitsu images.

As we mentioned in our report of the Japanese official website, some of the information is the same between Famitsu and the official website. Which isn’t a surprise since some people don’t read one or the other. As such, we’ll only cover what’s new.

The most notable addition, briefly detailed on the 2nd page, is Mila’s Gear, a valuable contraption that can peer into the past and the future. With Mila’s Gear in your possession, you can rewind the actions of units one unit at a time.

In the example, Mae got KO’d by a Mercenary on Turn 1. From the looks of things, you can rewind back to before the Mercenary attacked and try again. However, the author mentions that there are limits and it can’t be easily abused.

For starters, the gear icon in the bottom-right corner of the bottom screen is related to Mila’s Gear. Perhaps the number indicates the number of actions you can rewind. So far, this number has always been 3, so maybe you can only rewind up to 3 actions?

Additionally, we’re guessing that after using Mila’s Gear, there will be a cool-down of sorts to stop you using it again. If Mila is kind, maybe it recharges with each passing turn. Or perhaps you need to wait multiple in-game days for it to fill up.

The other function of Mila’s Gear that isn’t mentioned in Famitsu is the ability to scan Amiibo. For other information about how Amiibo are used, please read this section. 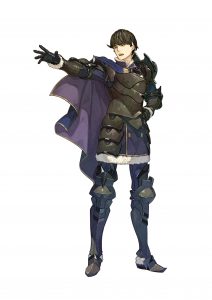 Next, you probably know all about Faye (Effie in the Japanese version) by now, but there’s at least one more new character in Echoes: Berkut, the dark-haired male character revealed during Day 1.

The Rigelian Emperor’s nephew, an advocate of the nobility who prizes his social standing. He convinced Desaix to turn traitor and instigate the Zofian coup d’etat. He’s vying to be the next emperor and commands the invasion of Zofia to prove his military prowess. 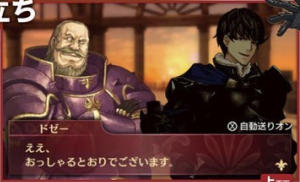 So far, it looks like Berkut will be filling in the role of villain or rival. In one screenshot, he can be seen colluding with Desaix, the Zofian traitor.

Otherwise, the rest of the feature mostly covers information we know from Gaiden or the character profiles from the official site. However, for the benefit of those who haven’t played Gaiden (or forgotten), we’ll recap everything anyway.

(Plus there are some pretty new screenshots!) 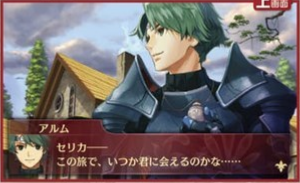 At the start of the game, Alm is living in Ram Village, near the borders of the Kingdom of Zofia. At this point in time, Zofia has been taken over by Desaix, a vile man who orchestrated the assassination of the royal family.

Of course, where there’s evil, justice cannot idly stand by. A group of Zofian nobility create the Deliverance, an army that fights to free Zofia from Rigelian control. One fateful day, Lukas, a member of the Deliverance visits Ram Village to recruit soldiers.

This is where he meets Alm and his friends. Although they’re all inexperienced in the world, they decide to join the Deliverance for their own reasons and rally under Alm, the strongest among them. Thus Alm’s journey begins. 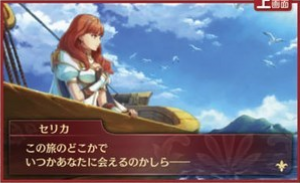 Meanwhile, far away on the island of Novis, Alm’s dear friend Celica also sets off on a journey, but for a different reason. Recently, the lands have been plagued by mysterious happenings, such as poor harvests and increased sightings of monsters known as Terrors.

After Celica has a ominous dream about Alm, she realises something isn’t right. Along with her close friends she sets off towards the Temple of Mila to seek answers. Along the way she meets sellswords and other travelers who end up joining her cause.

Gameplay-wise, Echoes sticks very close to the blueprints laid by Gaiden. Like in Fates, weapons don’t have durability. This time, there is no weapon triangle but instead terrain effects are very important. For example, Forests provide a whopping 40 Avoid.

Another thing you need to learn is that magic spells (both offensive and healing) cost HP to be used. Meaning you need to use your spell-casters wisely. On the plus side, magic ignores terrain effects, in addition to being versatile and powerful. 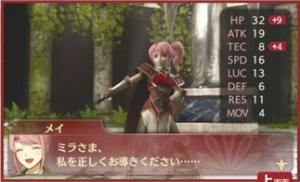 After characters reach a certain Level, they can change class, increasing their stats. Unlike other games, no item is needed; instead you need to visit a Mila statue. Most classes have a defined path, but Villagers can change into many classes.

The classes in Gaiden include many Fire Emblem staples, but with a few differences. Here are some of them.