On Thursday, March 16th, Series 8 of Fire Emblem Cipher was released to the public! A welcome blend of old game and new, the set focuses on characters from both Awakening and the second generation of Genealogy of the Holy War. 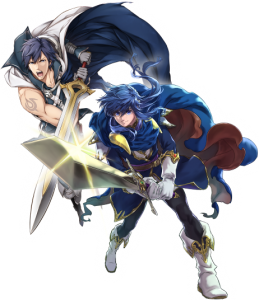 For once, Chrom gets to be the star of Awakening, earning himself a top-billed slot and two SR cards. His first SR is a gorgeous shot of him ascending to the position of Exalt as illustrated by Kotaro Yamada. 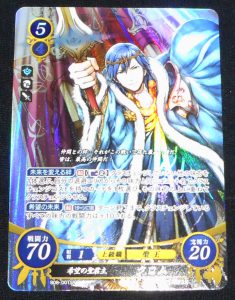 His other SR is quite a bit darker, showing how Chrom might be in an alternate world where he and Robin fail in their plans to defeat Grima. This Chrom, dubbed the Undead King of Despair, wears a smug expression and wields a corrupted Falchion as he rules over a ruined city. 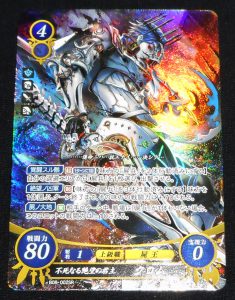 This latter card showcases both a new mechanic and stylistic theme present in the Awakening cards of S8. Risen monsters appear for the first time in card form, and Risen King Chrom makes good use of these cards in game.

The Risen cards also represent the first time we’ve had non-secret variants of any Cipher cards. All cards are numbered as B08-047, but with a suffix of ‘a’, ‘b’, or ‘c’ depending on which weapon they wield.

Some other cards in the set reference this alternate timeline as well, including Lucina and Tiki who seem heavily inspired by their Future Past versions. Additionally, a mysterious apostle of the Grimleal (aka Morgan) makes an appearance.

Other Awakening cards are devoted to characters who haven’t gotten much representation in Cipher yet, including many of the Shepherds. This is also our first time seeing some NPCs and villains get cards, such as Emmeryn, Gangrel, Aversa, and this somewhat-spoilery card of Grima. 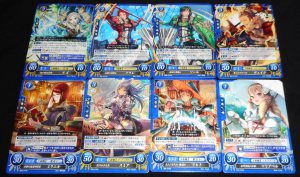 Like usual for newer games, signatures of voice actors appear on SR+ Awakening cards, and even one R+. The texture of the holofoil pattern on these cards is different from the regular SRs, making them extra special. SR+ cards are available for Exalt Chrom, Frederick, and Aversa, with Maribelle snagging a signed R+ variant. 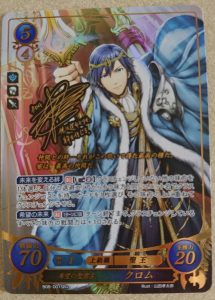 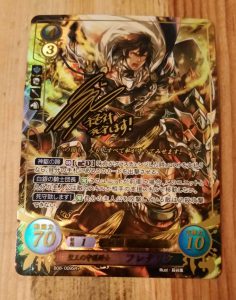 There is one other notable R+ variant card: Kellam. His regular R card shows him standing in the middle of battle, slightly confused at why nobody seems to be fighting him. The R+ variant on the other hand… 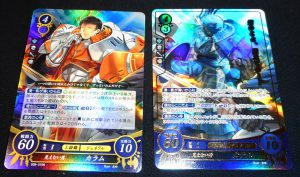 The “ghost” Kellam in the image is actually a part of the holofoil, appearing and disappearing based on the light. It’s an incredibly cool use of the holofoil effect, and one of the most unique Cipher cards to date!

Genealogy of the Holy War

On the Genealogy side, Seliph is our main headliner lord. As is typical for new lords in recent Cipher sets, he gets both an SR and an R card, with his R being the “normal” variant of the secret R+X card he received back in S6.

As a callback to his father’s SR in S6, Sigurd’s SR features some beautiful joined artwork in battle with Julius, both drawn by the talented Rika Suzuki. 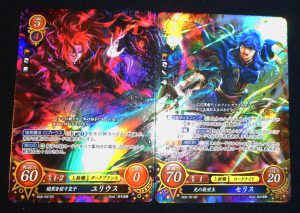 The other SRs of this half of the set are given to some other popular Genealogy children: Julia, Shannan, Patty, and Altena. Patty was something of a surprise SR announcement, but she comes with some very cute artwork by Kawasumi, and a complicated skill that’s difficult to pull off, but rewarding if you do so.

In another S6 call back, Seliph and Julia also have joined art SR+ cards together. Sigurd and Deirdre smile at them from the background. 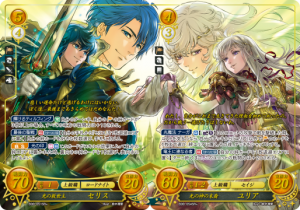 Many of the remaining Genealogy cards are given to the children of those characters who appeared in S6, with a few notable absences. There are some other characters as well, such as the lovestruck duo of Iuchar and Iucharba, older versions of Oifey and Arvis, and Hannibal.

Interestingly enough, a few substitute characters have managed to sneak in. Both Jeanne and Tristan appear in place of Nanna and Diarmiud. It is likely that those characters were held back for the upcoming Thracia 776 set coming in September. 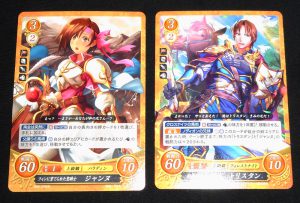 Similarly, Leif is also absent from S8, at least in the regular set list. He does, however, appear as a secret R+X card, hinting at his upcoming appearance in S10. 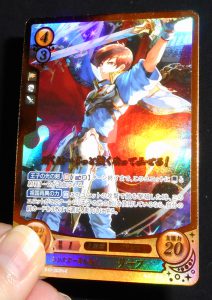 Other Genealogy R+ cards feature alternate artwork of the characters. One of the most interesting is Larcei R+ who forms a joined art with her regular R self. It’s an interesting artistic interpretation of the Astra skill. The sample image shows her R+ with a regular yellow border, but in the physical card, the border is absent like her regular R.

As usual, S8 booster boxes come with a variety of goodies in addition to the cards themselves. Each box comes with a small pack containing a promotion card for the next set and a holographic marker card. The preview promos for S9 are of Alm and Celica from Fire Emblem Echoes and feature their new official art by Hidari. 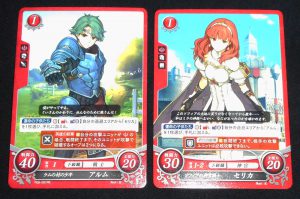 The marker cards use promotional artwork from Comiket 91 and feature either Cipher artwork of various lords, or pixelated art of the same lords. 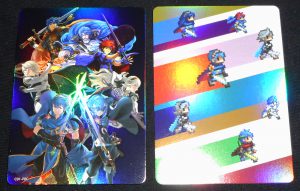 Each box also comes with some promotional sleeves, five in a pack. The Awakening sleeves feature promo art of Sumia and Lissa while the Genealogy sleeves use old official art of Deirdre surrounded by Holy Blood symbols. 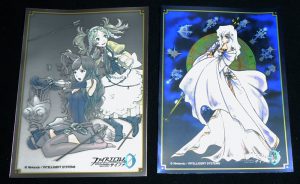 Meanwhile, three different sets of postcards were given away as promotional material by participating retailers. Luckily for international Cipher fans, AmiAmi was included as one of those sellers! The postcards feature Cipher artwork for Awakening, Genealogy, and Echoes, as well as some promotional pixel art.

The S8 tournament promos were recently revealed on the official site. They break the recent trend of focusing on characters from the current set, and instead feature a variety of characters from numerous games. 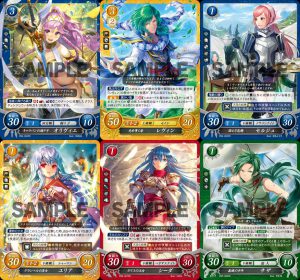 Each player who participates in an official Cipher tournament receives one pack that contains two of these cards chosen randomly, and winners receive an extra pack. Since these cards are only available to tournament participants, they cannot be bought from regular online retailers. However, they’re often resold on Japanese auction sites.

All further S8 promos remain a mystery. Currently, we have no news regarding a Guidebook for S8, nor for any magazine promos from Nintendo Dream or Dengeki Nintendo. We’ll post further news about any additional promos as it becomes available.

For more general information about Cipher, including links and information regarding purchasing cards, please check out my Newcomers Guide.

If you’re interested in discussing Cipher with other fans, come visit the Fire Emblem TCG section of the forums! You’re welcome to ask questions, get help with card rulings, post your pulls, trade/buy/sell cards, or arrange for online matches.

Much thanks goes out to Wolt and Cheah from various Cipher communities for providing some additional photographs used in this article to supplement my own.