Previously this month, @FE_Heroes_JP announced a series of updates scheduled to arrive in April. Now, three additional updates will be arriving at the same time. These updates address a few complaints that players have had about the game in its current state.

Starting with the new update, Heroes players will be able to change the starting positions of their four units at the beginning of battle! During the very first turn, before moving any units, you can tap a new “Change Positions” button along the bottom that will enable you to freely move your units. 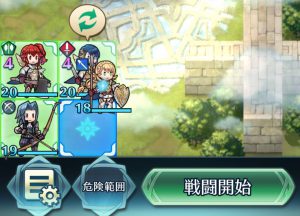 The experience formula will be tweaked slightly to enable better level progression for lower-rarity units. 1★, 2★, 3★, and 4★ units will gain more relative experience when fighting lower level units. The lower star rarity of the hero, the more EXP they’ll be able to earn from fighting weaker enemies. Experience gains for 5★ units will be unchanged.

The maximum amount of Stamina available is being raised from 50 to 99 stamina. Additionally, Stamina Potions and Orbs are also being updated restore a full 99 stamina when used.

There is no set date for these updates to arrive yet, aside from sometime in April.