This month, Fire Emblem Echoes: Shadows of Valentia is releasing in Japan and, to assist gamers, Nintendo and Shogakukan are releasing a 304 page official guidebook on 27th April, 7 days after the game comes out. 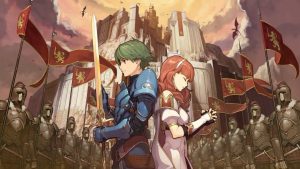 By that time, extremely dedicated fans will probably have blown the game wide open. However, what’s particularly interesting is the guidebook description, which reveals a few unpublicized game features–including a potential game changer…

The official guidebook for Fire Emblem Echoes: Another Hero-King to be released on 20th April 2017 for the Nintendo 3DS.

In the system section, we explain in detail all the basic mechanics necessary to play the game, such as the alternating two main characters, class growth, flow of battle, dungeon exploration, village and street base conversations etc.

The core section of this book, the tactics section, covers Chapters 1 to 5, as well as the new Chapter 6 added after the ending, and includes detailed battle maps with strategies geared for Normal mode play. Of course, Hard mode tips will be provided. Also included are all the items obtained from base and village events, as well as dungeon maps.

In addition, in the data section, there is complete overage of units, skills, equipment, forging, provisions, medals, renown and so forth.

It’s a comprehensive guidebook that provides full assistance to those journeying through Valentia.

The biggest thing here is the inclusion of a new post-game chapter, Chapter 6. This is just a guess, but perhaps it will allow players to combine Alm and Celica’s parties?

In addition, base conversations will be making a return since New Mystery of the Emblem, at least in some form. Furthermore, the “medals” and “renown” features sound intriguing.