Today the Fire Emblem Heroes 1.2.0 update landed, bringing along a host of welcome gameplay improvements and features. One such feature is Sacred Seals, a new type of equippable item. 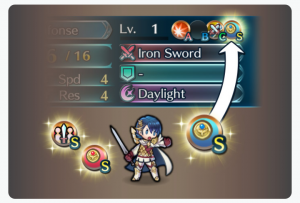 These function similarly to traditional Passive Skills, in that they provide various buffs when equipped, but the key difference is that they can be easily distributed between Heroes. Also, you may only possess one of each Sacred Seal.

To help players obtain Sacred Seals, a set of special quests have been added to the game, which run until 28th April 2017. During this time, there will be a Sacred Seals Log-in Bonus that awards 2 Orbs daily.

Additionally, for smashing last week’s Voting Gauntlet milestones, all players have been awarded 20 Orbs, 5 of each Great Badge and 5,000 Universal Crystals. These can be picked up from the Present List as usual.

Last but definitely not least, to celebrate the upcoming launch of Fire Emblem Echoes: Shadows of Valentia in Japan (and the Western launch in a month’s time), Nintendo released a trailer for a Echoes-themed banner arriving on 14th April 2017.