Fire Emblem Cipher‘s official website updated on Thursday with a new Frontier column. These columns are a fun way to share news announcements in the guise of a conversation between the Cipher mascots: Emma, Shade, Yuzu, and Lando.

This update focuses on some news for the upcoming Series 9 and also some Cipher events that will take place in Japan this summer. The column can be read here if you know Japanese, but the important bits for international Cipher fans are listed below.

Images for S9 booster packs and the new structured deck have now been revealed! As expected, Alm will be the focus character of the ST Deck. Entitled “Lands of the Gods”, the deck will feature characters from Fire Emblem Echoes. It will also include a download code for four in-game items. 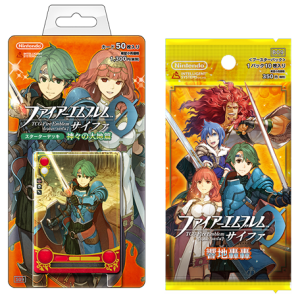 The booster pack artwork features both Alm and Celica from Echoes, as well as some characters from the other games featured in S9. Al from Hasha no Tsurugi and Skrimir from Radiant Dawn represent the set’s characters from Elibe and Tellius.

Next, we have images for the booster promo sleeves. Each S9 booster box will contain one pack of five sleeves from the follow two designs. One features the box art for the original Gaiden release, the other remade box art for Echoes. 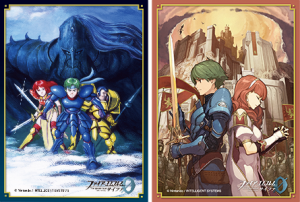 Related, retailers have begun offering pre-orders for the S9 sleeve packs. As usual, four different sleeve packs will be available, featuring character art from S9. They include Alm, Celica, and Faye from Echoes, as well as Jemmie from Hasha no Tsurugi. You can pre-order all four sleeve packs from AmiAmi. 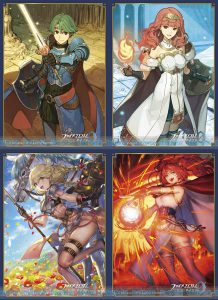 The last of the S9 images show off three new pieces of artwork for previously unrevealed cards. From left to right, we get new artwork for Silque from Echoes, Elphin from Binding Blade, and Tibarn from Path of Radiance and Radiant Dawn.

Also of interest in the Frontier article, a new summer event has been announced! “Go! Go! Summer Tour!” will begin on 1 July.

Like last year’s Cipher Caravan events, the tour will be a fun event for all Fire Emblem fans, not just those interested in Cipher. There will be mini-concerts, merchandise booths, and autograph opportunities from Cipher artists. Cipher players will also have a chance to compete in special tournaments.

We’ll share more information about the event and its merchandise as soon as its available.

More news for S9 will likely be coming soon! @FECipher has been revealing mascot cards for the last few days. This generally signals that new daily reveals will be starting shortly.We may get them as soon as this coming Monday!

Additionally, the next livestream will arrive in just over two weeks on May 13th. The stream will show off new S9 cards, and will also share further details about the ST Deck DLC codes.