We finally, after nearly 5 months of waiting have some proper information on the upcoming Fire Emblem Warriors.

First off we’ll go over some translated tidbits, all of which come from this week’s issue of Famitsu. 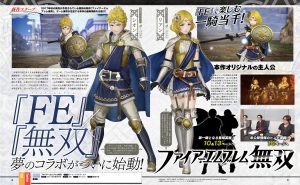 Two original protagonists: Shion and Lian. They are twins from the Kingdom of Aitriss and the children of Queen Yuana.

Shion (VA: Yūma Uchida – Who voices Rock Howard in The King of Fighters XIV in terms of recent game roles.)

The royal prince of the Kingdom of Aitriss. Aspires to be a knight who fights on the front-lines rather than a king and thus encourages his twin sister Lian to inherit the throne.

Shion’s older twin sister. Clever and is understanding of her own faults, so she has no desire to inherit the throne. Rather, she encourages Shion to become king.

Our sibling duo is actually voiced by siblings, bond supports between them will probably feel natural.

Marth meanwhile will once again be voiced by Hikaru Midorikawa. 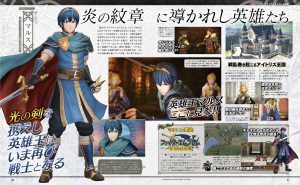 First off we have a new kingdom, Aitriss. The story of the game will likely involve the Outrealms or different dimensions; Dragon Quest Heroes & Hyrule Warriors used similar plot points in bringing its casts together. Which is supported in the next line here.

The War-torn Kingdom of Aitriss

After Shion and Lian’s father–the king–died of illness, the kingdom was without a ruler for a long period, but thanks to the aid of the neighbouring kingdom of Guston, its people were able to leave in harmony.

However all this came to an abrupt end after monsters form another dimension appeared and took over the kingdom.

The Two Protected by the Queen and the Foreign Prince

The story begins right as the kingdom is suddenly attacked. Shion and Lian who have only known peace until now find themselves attacked by monsters and are separated from their mother Yuana. While visiting, Prince Darios from the Kingdom of Guston helps Shion and Lian escape the castle by request of their mother… From here, a battle to reclaim their homeland begins. But where will their path lead to?!

An original character; prince of the Kingdom of Guston. He taught Shion the way of the sword and Lian the academic arts; as such, he is revered like a big brother.

Yuana (VA: Yuka Nagayoshi – Who doesn’t seem too have many notable roles to her name)

The ruling queen of the Kingdom of Aitriss. Her husband–the king–passed away to the other world. Although she’s troubled by Shion and Lian both unwilling to inherit the throne, she gently watches over them as they grow up.

Darios will probably serve as a mentor character of sorts to the two leads, as they progress through the story.

Yuana will most likely be a side character, or even less in stature considering the usual role of a parental figure in Fire Emblem. 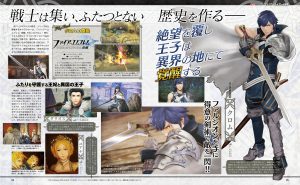 With Chrom & Marth both present we may have a meeting that some FE fans have wanted since Awakening launched. There is a weird time gap, but most likely Ylisse & Archanea will be treated as two separate dimensions or entities despite the future connection.

Interview Tidbits (paraphrased by VincentASM; my thoughts are in italics)

Game will be full voiced and there’s a large amount of dialogue.

Coming off of Echoes its really exciting news, considering how well it was done there.

Most of the playable characters are from Shadow Dragon, Awakening and Fates. They decided against having all the protagonists from each game since most of them primarily wield swords. As such, it would make the weapon triangle system unbalanced.

They are the 3 most successful games in the franchise (well Mystery of the Emblem more so than Shadow Dragon). So it makes sense to focus on these 3, but do note that it says “most” not “all” so there’s hope for certain characters still–I’m expecting Heroes popularity & Smash appearances to play a role here. While dismayed by the “too many swords” argument, I am willing to let that slide due to the focus on the weapon triangle

There is an ability to switch characters (although details are sparse). Players can look forward to controlling characters with various weapons and classes such as archers and mages. In fact, there are more characters compared to other Warriors collaboration titles (not counting sequels).

In Warriors Orochi, Dragon Quest Heroes and Hyrule Warriors Legends you can switch between a group of people you pick–FE Warriors having this will likely expand on the tactical aspects along with the weapon triangle. Also getting more characters than other first collaboration titles should throw our roster margin into the 25 to 30 range, may be more but we’ll have to wait and see.

Speaking of the weapon triangle, it works as expected. So swords will have an advantage against axes, for example. There will also be bonus damage such as Pegasus Knights being weak to Archers. Furthermore, horseback characters will generally stay on their horse.

So cavaliers, pegasus & wyverns are going to play like how Link did on Epona, which should work fairly well. Its nice to hear that we’ll have good variety in weapon types in general. This might mean we get Ridersbane and other such weapons, to get advantages.

Support conversations are included as “Bond Conversations”. Quite a lot of content, ranging from serious to silly. Creating bonds does not lead to marriage; rather, characters will become more like close friends.

Support conversations will likely be a huge drawing point. Warriors Orochi 3 kind of had them but they were really drybones, and Musou Stars has expanded on this concept, so it’s only natural that it’d be more of a focus here.

The game is so close now, and hopefully E3 will present us with even more information. Stay tuned my fellow Warriors.