We’ve had another exciting week of news and reveals for the upcoming Series 9 of Fire Emblem Cipher! As usual, the @FECipher twitter account has been busy sharing new cards each weekday. Today’s revealed card is the third and final green SR and features Jill from Path of Radiance and Radiant Dawn. 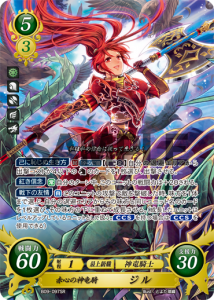 Also representing Tellius is an R card for Lethe. We also get two cards featuring Kilmar from the Hasha no Tsurugi manga. 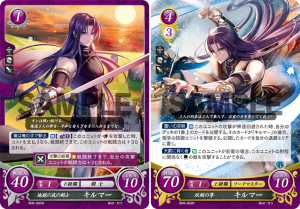 The majority of the week’s reveals however belong to the newest game, Fire Emblem Echoes. Deen and Sonya, the duo of Grieth’s Pirates from Celica’s story, each get a card. Zeke also earns himself two cards, an unpromoted N card and an R as a Gold Knight. 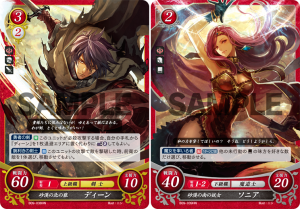 Last weekend, a women’s Cipher event was held in Kobe. Organizers of the event showed off new piece of promotion artwork featuring Zephiel and Guinevere as they appear in Blazing Sword. Likely this artwork is from an unpromoted card for Zephiel that will appear in this set. 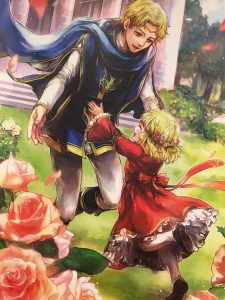 The Cipher official website has updated with additional information about S9 as well. New images added to the page show off small versions of some of the cards from both the ST Deck and the Booster series.

The page also lists all of the cards that will be available in the ST Deck. There will be ST exclusive cards for for Alm, Celica, Mycen, Boey, and Valbar. The ST will also have exclusive holos for Alm, Celica, Kliff, and Genny. The entire translated contents of the deck can be seen here, thanks to bookofholsety.

Finally, at the very bottom of the page, you can see small digital images of the additional booster box contents for S9. Each booster box will contain one pack of promotional sleeves, a promotional reprint card, and a preview promo for S11 chosen randomly from the following options. 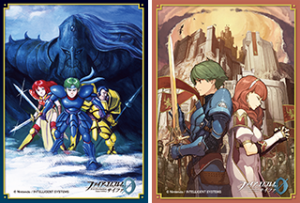 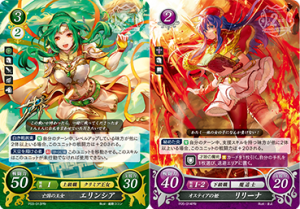 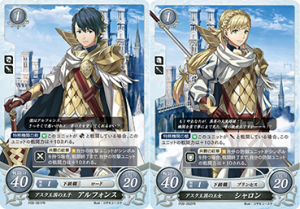 Cipher Series 9 will release in less than two weeks on 22nd June 2017! Until then, we’ll continue to share Cipher news as it arrives. For further discussion and information about Cipher, feel free to join us in the Cipher subforum of the Serenes Forest forums!