We’re now less than a week away from the Series 9 release of Fire Emblem Cipher! @FECipher has kept up the excitement with another week of reveals, culminating in our very first signed card: Clair SR+ from Fire Emblem Echoes! The signature on the card is from her Japanese voice actress, Aya Endo. She also gets a matching N card. 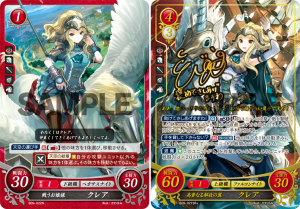 Another SR card was also revealed earlier this week, this time featuring Zephiel, the main antagonist of Binding Blade. His N card shows a young Zephiel celebrating happier times with his sister Guinivere. It’s a stark comparison to his more violent SR card, which is also the third and final Purple SR of the set. 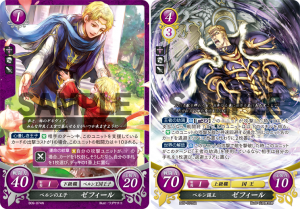 The remaining reveals for this week are all R foil cards. Delthea from Echoes is featured casting the powerful Ragnarok spell. Two Laguz royals from Path of Radiance and Radiant Dawn also get some visually stunning cards: Dheginsea and Caineghis. Caineghis’s whopping 100 Attack is currently the highest in the game.

These cards also imply that we may see a bit of an imbalance of R cards split up among the three colours of S9. We expected that there would be eight R cards for Red and four each for Purple and Green, which would match the ratio in previous sets. However, there are now five R cards confirmed for Green: Ike, Lethe, Zihark, Dheginsea, and Caineghis. 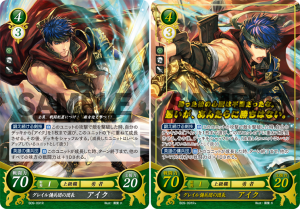 The current theory is that Purple and Green will get five R cards each. This would mean that Red would likely only get six Rs in total, despite filling up half the series roster. With the series release coming so soon, we’ll learn the truth before too long.

In fact, the mystery may be cleared up as soon as tomorrow during the S9 pre-pelease livestream! Once again, Ryota Kawade and Young will be hosting their pre-release event live over NicoNico the Saturday before set release. They will be joined by a large variety of guests, including:

Pre-release livestreams typically feature lots of pack opening to show off cards from the upcoming set. Likely we’ll get to see the remaining unrevealed SR cards as well as a few other treats. We may also get some artwork or other news for other upcoming sets. Tune in here at 8:00pm JST tomorrow, Saturday 17 June, to join in on the fun!

Interestingly, @FE_Heroes_JP, the official Japanese Twitter for Fire Emblem Heroes, retweeted @FECipher‘s tweet about the livestream. This may imply that we can expect to see Heroes-related information in the stream, perhaps relating to the Heroes cards that will be released in the upcoming S10.

Cipher Series 9 releases in less than a week on 22 June! As such, our livestream coverage will be the last S9 article before set release. For further discussion and information about Cipher, feel free to join us in the Cipher subforum of the Serenes Forest forums!