Almost a year after Vestaria Saga I was released, S_Kaga has revealed his upcoming plans for the series on his blog. 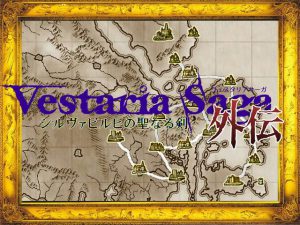 Instead of Vestaria Saga II, fans can look forward to not one but two gaidens (side-stories) deeply connected to the first game.

From our understanding, the main body of volunteers working on the 2nd game (Vestaria Saga II) are taking a much-needed break. But rather than keep us waiting, S_Kaga wants to use this downtime to flesh out the stories introduced in the first game.

Here are the details that S_Kaga shared with his followers:

A brief report on the subject matter.

A small game made up of 4 chapters. A prologue focusing on the Lucca trio and village elder, as well as Alicia.
I am in charge of the design plan and supervision, but the production staff (two people) are developing it independently.
The initial trial production for 4 chapters was completed since this Spring, but we are currently redoing the work by order of a strict “no, we’re remaking the whole thing” director.
This game is designed to secure young producers who will be responsible for the future of Vestaria ^^

2) Silverbirch’s Sacred Sword (temp. title)
Started this Summer with the aim to complete Zeid’s story.
About 10-15 chapters in total.
Originally, this part was meant to be in the 2nd game (as something that could be shown on the side like Sennet’s story in [TearRing Saga]).
Work began on the 2nd game after feeling bad for the players who wanted a resolution for Zeid and Atol’s story, which was left unresolved due to issues with labour and resources.
However since vestariaproject  [the group of volunteers who worked on the first game] is taking a break (as promised from the beginning), I will be essentially working alone.
(Not including obtaining resources.)

Therefore, there is a lot of recycled material from [Vestaria Saga] I and it’s impossible for the content to deviate too much from [Vestaria Saga] I.
We will decrease the difficulty level (and it will take time and effort to adjust for high difficulty) and we would ask for the co-operation of volunteers to help us play-test.
Please expect the story to be mainly presented like a visual novel [i.e. lots of dialogue].

Schedule has not been set in stone. It goes without saying that there’s always a chance both games will not see the light of day.
We hope to arrange a private release (while recruiting test players) next Spring as originally planned.
After that, I want to announce the games on the website, etc. and distribute them free of charge.
Let’s talk about these developments again at a later date.

A special thanks to Kirokan for helping with and checking my translation.