Coming to you from Gamescom, here are some more character reveals for Fire Emblem Warriors, we have Camilla, Leo, Hinoka and Takumi from Fire Emblem Fates.

Interestingly enough Sakura & Elise are absent, does this mean they won’t be joining the fray? Or perhaps they are being saved for later.

Also according to the UK version of the trailer, the west is getting the game on October 20th. 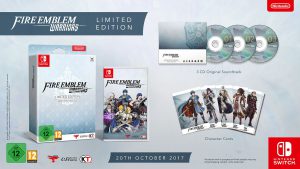