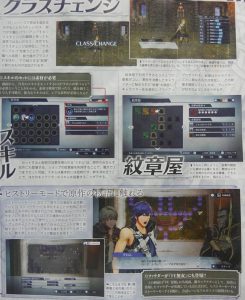 Some new Fire Emblem Warriors details have been leaked and subsequently translated by our member on the forums Torii.

-When you promote you can get new skills and your stats increase. Characters might also get new weapons (Rowan has a lance in the picture)

-Rowan promotes to Master (i.e. Great) Lord and can be seen holding a lance

-Teasing Master Seals by saying “Wonder if you’ll be able to get them (Master Seals) on the battlefield?”

-You will need materials to get new skills (for example, for Luna you need Chrom’s Leather Belt)

-Materials are dropped by defeating characters on the battlefield

-The better the skills, the more rare materials you’ll need

-Up to three skills can be equipped

-Skills are normally limited to each character, but if characters increase their bonds, they can get skills from other characters

-Badges change with each character

—> Seems to be based on the original games

-In History Mode, you control characters on a 2D map

-If a unit meets an enemy unit on the 2D map, a Warriors-style battle will initiate and you’ll have to complete certain conditions

-Bosses will appear in History Mode

-There will be conversations and full voices in History Mode, just like in Story Mode

History mode also has Thabes tower from Shadow Dragon being teased as one of the maps. Validar is shown and is now confirmed to be an enemy NPC, more details at the bottom.

This is actually like a mode I wanted in the game in the first place.

Rowan getting a lance is cool, I wonder if Lianna uses an axe or also a lance?

Skills being like this is certainly interesting, but works for a game like this, usually they are equipped on your weapons in Warriors games, but this probably works for the better since we’re going to be switching weapons a bit.

Stay tuned for even more details on the 7th as before.

Validar is an NPC confirmed now

Famitsu shows that Validar will appear in #FEWarriors but as enemy NPC. Scenes in History Mode will also be fully voiced.#KTFamily pic.twitter.com/ErTdHnrQ2u