On the final day of the Tokyo Game Show, Koei Tecmo revealed their plans for the Fire Emblem Warriors DLC. 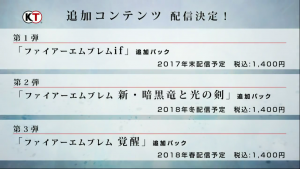 Currently, three DLC packs are scheduled for release between late 2017 and early 2018 (in Japan).

No concrete details were shared, but if the packs are similar to the ones for Hyrule Warriors (and Legends), we can probably expect to see a few new characters, costumes and maps per pack. 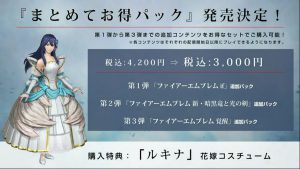 To save money, there is a 3,000 Yen season pass for the 3 DLC packs, which is a saving of 1,200 Yen. Those who buy the season pass will also receive a bonus Bride Lucina costume.

(Screencaps were taken by Azz)

Update: The release dates and pricing for the North American and European versions have been revealed. Please check the links for details.