This Sunday, 2018’s last Fire Emblem Cipher Festival event took place in Japan. Although these events are mainly focused on the Cipher card game, sometimes other snippets of information are brought to light. 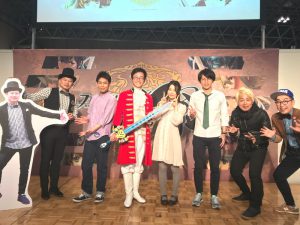 (We only have official photographs from the event.)

According to event-goers on Twitter etc., a Fire Emblem Warriors character trailer for Tharja–one of the three new Awakening DLC characters–was shown on stage. Earlier, the official Japanese Warriors Twitter teased a surprise at the event, which appears to be this.

Sadly, because photography was prohibited at the event (outside of designated zones, like the artwork exhibits), we don’t have any pictures or videos to share. From what we can tell, the fans who saw the trailer were all very hyped–and it may even have distracted some tournament players…

(A poster on 2ch commenting about the Tharja trailer.)

Apparently, Tharja is a Robin clone, which probably isn’t a huge surprise. One of the new History Maps is based on Chapter 9 of Awakening, where she’s recruited, which again anyone could’ve guessed. Finally, during her victory movie, she poses like her official figure. Hmm, how will she pull that one off?

Currently, there still doesn’t seem to be a date for the Awakening DLC, beyond the tentative “before the end of March” date that was provided from the start.

Strangely, Fire Emblem Heroes advertised a new set of Awakening special maps for 12th-13th March, which presumably tie in with the Awakening DLC. But the reference was removed at the last minute (although you can still see it on Twitter).

Moving on, Yusuke Kozaki–the character illustrator for Awakening and Fates–was quizzed about a Fates artbook on stage. This is what event-goers have said anyway. It sounds like Mr. Kozaki has been very busy, but he’s hoping for the book to release before the end of this year.

Although Fates was released nearly 3 years ago, a proper artbook–akin to The Art of Fire Emblem Awakening–was never released. From our understanding, the main reason for its delay is because of Mr. Kozaki’s busy schedule; he simply hasn’t had time to draw all the characters.

On a related note, in case you haven’t heard, a Fire Emblem Echoes artbook is slated for a 30th March 2018 release (in Japan). Dubbed “Valentia Accordion”, the book is published by the same people that brought us the Tellius Recollection pair of books.

Currently no other details are known, besides a price (3,780 Yen) and page count (256 pages). You can pre-order the book from Amazon Japan or CDJapan, etc. As soon as more details arrive, we’ll let you know!

–A big thanks to Chrom/@theprinceofiris for bringing this info to our attention!