A new banner is now available in Fire Emblem Heroes! Spend some Orbs on the Cooldown Bonuses Summoning Focus to try and score Brave Ike, Mia, or Nephenee. 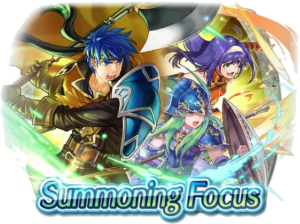 Each of these heroes has someway to improve the time they need to use their Special ability. Ike’s Steady Breath lowers his cooldown if an enemy attacks him during Enemy Phase. Mia’s Flashing Blade skill lowers hers if she outspeeds her enemy. Nephenee’s Wrath also does the same based on her HP, and also offers more damage to her Special.

The Cooldown Bonuses Summoning Focus will be available for about two weeks, ending on 21 April at 6:59am UTC. Each of these heroes is only available via 5★, so now is a great time to try and get them to add to your team!

Additionally, a new Feh Channel is coming soon! It will air in a bit less than two days, on 10 April at 3:30am UTC, or 8:30pm PT on 9 April. Likely it will contain information on the upcoming April Update and possibly some other goodies.

We’ll provide coverage of the stream once it’s done, for people who can’t watch along live.