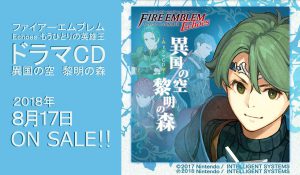 In addition, there are some original characters: Yuri, Mother (as in from a church), Magnus and Vidal. Presumably the named characters are from the Deliverance or Rigel.

From 22nd June, there will be weekly samples added to the website. Then from 13th July, it will switch over to weekly cast comments until 10th August. (Then on the following week, the CD is out.)

Currently it’s not known if there will be more drama CDs for Shadows of Valentia, but since this one is clearly Alm-themed, it wouldn’t be surprising for there to be at least a Celica-themed one.