Keeping up with the available cast of Heroes just got harder, with the addition of two new characters, and ability to recruit one pretty popular one that’s already well known.

New Heroes (Brave Redux) brings Summoners access to Loki, as well as new faces Odin and Kliff, from Awakening and Shadows of Valentia, respectively. Of course, they come with a new Paralogue entry, Brave Redux, so you’ll have some chances to score more Orbs to summon these three (or maybe some Festival stars) that much easier. 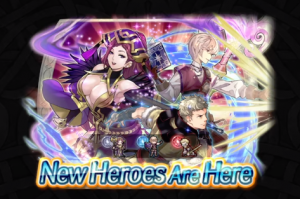 Both new Heroes come with a handful of new skills exclusive to them, so be on the lookout for some new powers, even if the units themselves don’t interest you. If you’re a heavy Arena-goer, Loki’s C Duel Infantry 3 may spark some attention, letting you score higher with those healers or dagger users.

My big question, is what tome is she packing?!

Finally, Aversa (a Red Tome Flier) can be been spotted in two of the revealed Paralogue battle previews, implying that she’ll be joining the roster soon.

Update: The official Japanese Twitter account kindly informs us that Aversa will be arriving via a Grand Hero Battle on October 25.

Regardless, the new Heroes and Paralogue run from October 23 through until November 9 at Midnight PT, so you’ve got two weeks to do your best!

For more details on the units and their skills, click Read More.