The first major post-3.0 update is now available in Fire Emblem Heroes! Load up the game to begin downloading the Version 3.1 Update for access to the newest changes. If Heroes does not download the update automatically, you can grab it manually from the Play Store or App Store.

Most notably, Version 3.1 provides support for a new type of hero: Beast Heroes, which will be arriving tomorrow in the Rulers of the Laguz banner. We also get updates to Legendary and Mythic Effects and some AR changes. Additionally, four heroes can make use of new Weapon Refinery Updates.

Read more below for further details and other small changes.

Five Beast units will be arriving in Heroes shortly, with more likely on the way. Beast units have some new mechanics that are different from other unit types currently in Heroes. Specifically, they can transform at the beginning of the Player Phase, so long as they are not adjacent to a “human” ally. 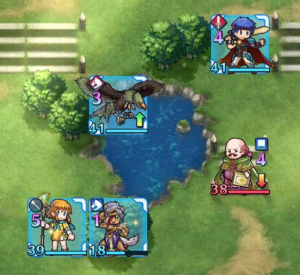 Human allies are any units that are not Breath wielders or other Beasts. Characters that are canonically Manaketes but do not wield dragonstones (for example, Halloween Nowi, who wields a red tome) count as humans for the sake of this mechanic.

Transformed Beasts gain stat boosts and can also move an additional tile, similar to how transformed Laguz work in the Tellius games! We’ll get to see them in action soon with the Rulers of the Laguz banner tomorrow and Naesala’s GHB the day after.

Legendary and Mythic Effects are getting a bit of a boost to make each one more useful in the other’s mode. Before Version 3.1, Legendary blessings mostly affected Arena with Mythic blessings affecting Aether Raids. Neither one had any value in the opposing game mode.

Now, Legendary heroes will receive the Mythic bonuses when deployed with an appropriate Mythic hero in AR, so long as the season matches both of their types. Similarly, Mythic heroes can get the Legendary bonuses in the Arena under the same conditions.

To accommodate this change, Arena and Aether Raid seasons will now both begin on the same day, so the blessing schedules always converge. The current Aether Raid season has been extended another day to sync them both up.

Additionally, there are a few other updates for Aether Raids. You can now upgrade the Aether Fountain, Catapult (O), and Catapult (D) one more level each. Auto Setup has also been optimized further.

Because of these changes, once you upgrade to Version 3.1, you will no longer be able to watch Defense replays from players still on version 3.0.1.

Four new heroes are all getting weapon upgrades in the Weapon Refinery!

First up is Tailtiu, who gets a brand new unique tome, the Tome of Thoron. This tome, as well as Seliph‘s Tyrfing, Deirdre‘s Divine Naga, and Julia‘s Naga can also be further upgraded in the Weapon Refinery! Check out their upgrades and special refines below.

In addition to the unique refines, each weapon can also get the standard Mt/Spd/Def/Res refines.

NOTE: If you’re looking for the Merge Allies update, that’s not expected to go live until the next major update, Version 3.2, which will go live sometime in February.