Today at 3:00AM UTC, Fire Emblem Heroes updated to Patch 3.2.0, adding some new content and making some changes to various things.

Here’s a quick overview of what’s gone down:

Read on to get more details!

First off, some new items have been added.

These Dragonflowers are new inventory items, and are used to increase the stats of Heroes. Red = infantry, green = armour, yellow = cavalry, and blue = flier.

Allies can be upgraded with Dragonflowers up to 5 or 10 times in total, earning a point in each stat for each upgrade. The points are distributed from top to bottom, so in order of HP, Atk, Spd, Def,then Res.

Due to the way the extra stats are applied, units that benefit most from Atk and Spd are at the most advantageous because they will not need to have the later, more expensive Dragonflower upgrades applied. Defense-oriented units will require more investment. But I’m sure most of us will completely upgrade our favourite units, regardless of their best traits! I know both my Ninos will be getting the full treatment.

The costs are high, but these are not intended to be quick and easy upgrades. Right now we can earn some each week from Aether Raids and from the new Heroic Ordeals mode (see below), but I’m sure more avenues for Dragonflowers will begin showing up as time goes on. We’ll just have to wait and see.

You can upgrade your units with Dragonflowers from the Ally Growth menu.

Heroic Ordeals have been added

This is a new game mode, available within the Story Maps menu. Every Hero within the game has their own unique map and enemies to defeat. Pair your primary unit with any ally and defeat at least 2 enemies with the primary unit to obtain the Dragonflower rewards. 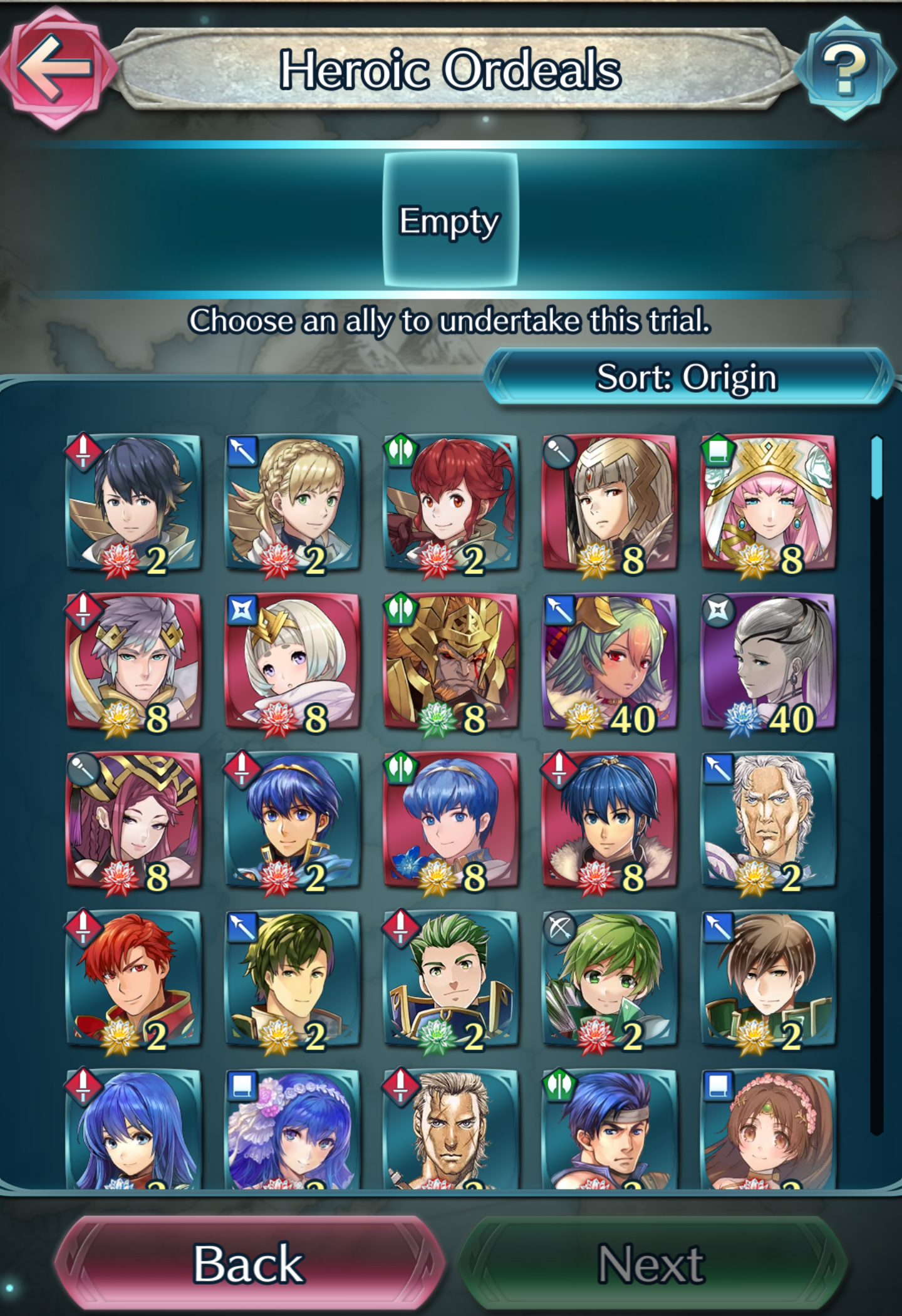 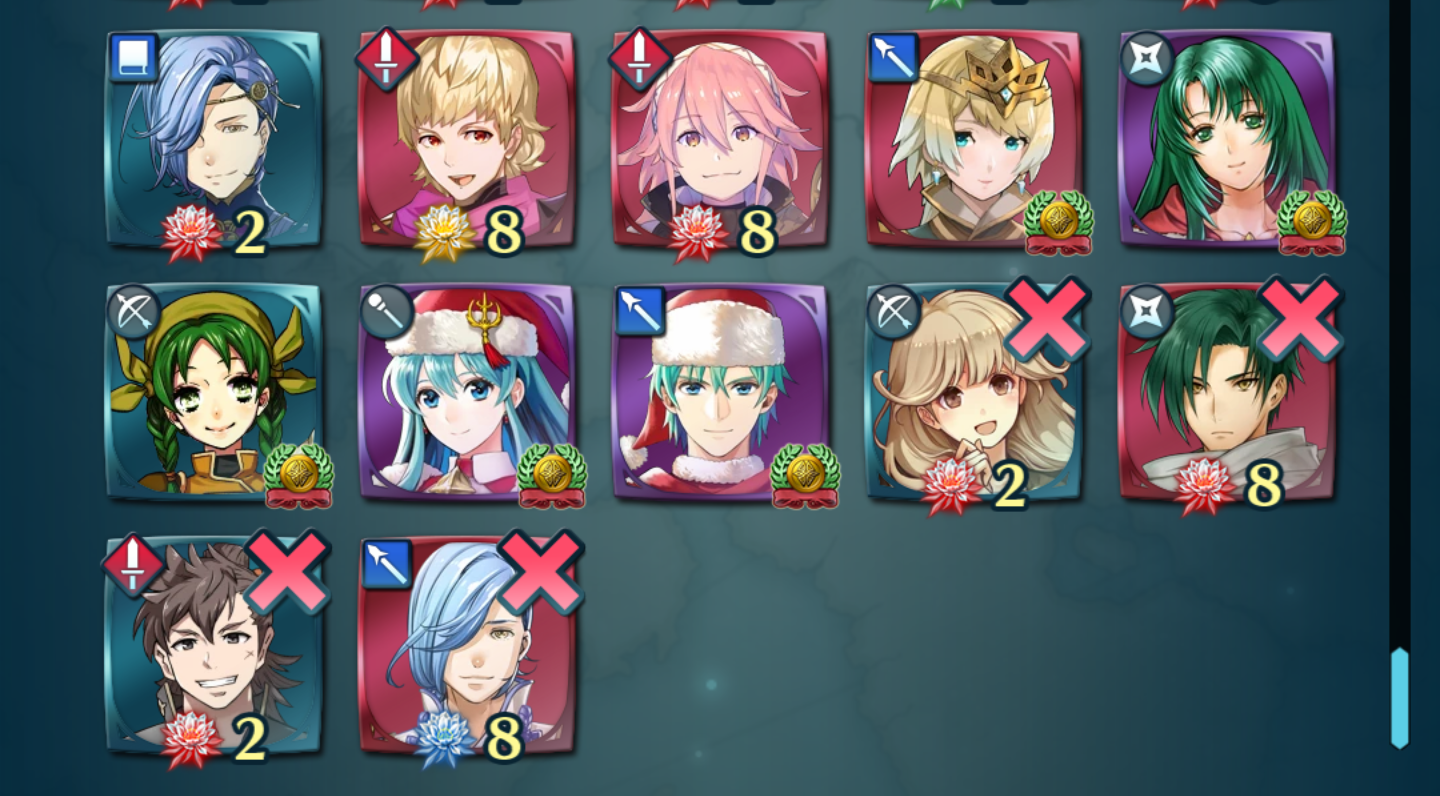 Heroes who you used to own but no longer do (e.g. you used them for fodder, sent them home, turned them into manuals, etc.) will also appear at the bottom of the list with a big fat red X icon attached. This means that they are unable to complete their Heroic Ordeals because you no longer own them.

Merge Allies has been expanded

As revealed a while back, Merge Allies has been improved upon.

Essentially, any unit that has received at least one merge will no longer have a “Flawed” stat (or “bane,” as we’ve come to unofficially know them as up to now). This includes all rarities; even a 3 or 4-Star Hero will have their flaw stat neutralised if you merge another copy of them into it, whether it was -3 or -4 lower than neutral.

Also, a Hero with no Asset or Flaw (neutral) will instead receive 3 points distributed evenly between their 3 highest level 1 stats.

New Year Laegjarn is neutral. She would gain +3 stats distributed evenly between her 3 best stats on top of the regular +2 stats gained for the merge. If merged, she would gain +2 HP, +2 Spd, +1 Def.

Of course, Heroes who were already merged before this update will automatically have these changes applied to them. Go through your merged units and check out their fresh new stats.

As you may have noticed in the Eirika example above, you are now able to see your units’ assets and flaws by way of colour. Flawed stats show up in red, while assets are blue. Very convenient to the point that it may even kill off some “IV Finder” applications. Oops? You can find the option to turn this new feature on in Settings.

Sharena’s Hero Introductions have been added

Within the Summon menu, you are now able to click on “About Heroes” where you will be directed to a website which features information about the Heroes, called “Meet some of the heroes.” The website doesn’t have a lot of featured Heroes yet, but it will continue to expand as time goes on.

The character pages feature simplistic yet cute images to accommodate the text, telling us a little about their past, friendships, and ideals. Visit the site and check it out for yourself.

Aether Raids has been updated

First of all: New tiers above Tier 21: 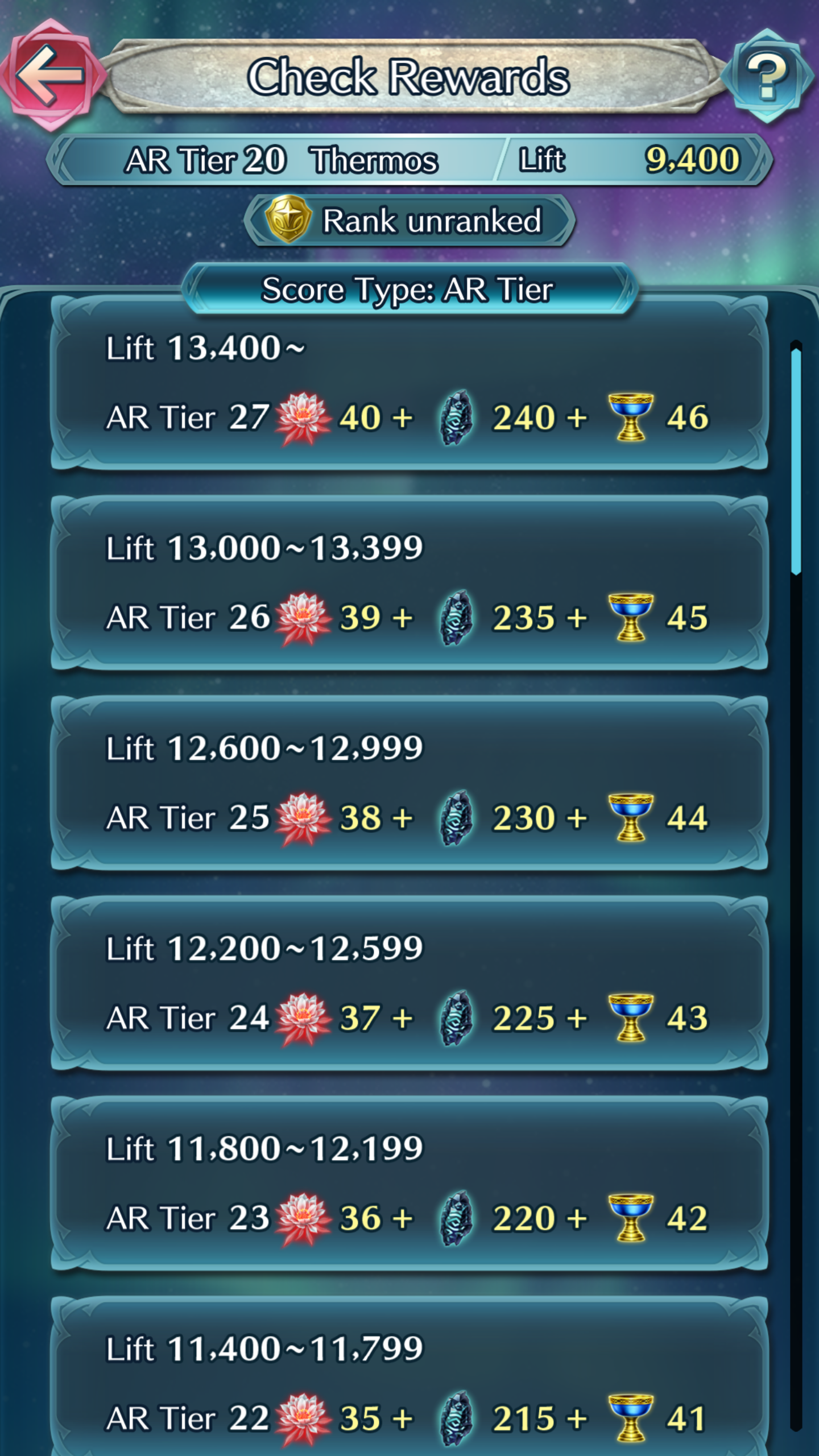 Since Tier 21 will slowly but surely become more and more saturated, it’s probably a good idea to give players already in T21 something to try aiming for each week. Everyone in T21 and above is still reset to 11,000 Lift every week however, so these Tiers are not longterm goals by any means.

Aether costs have been adjusted. You can no longer play for free once a day. However, the total cost for a run has been halved (new equation is 9 + Lift / 200 [rounded up]) and capped at 50 Aether per run. If you were in the higher tiers of Aether Raids, you’ll know all about the costly amounts of Aether needed to perform a run. Some days, you couldn’t even do anything else besides the free run.

As well as this, the amount of Aether gained from destroying resources has been halved (new equation is 2 + Lift / 1000 [rounded down]), and is capped at 10. So if you’re like me and weren’t making a real effort of targeting the enemy resources often, you will be less affected than those who almost always did destroy the resources.

Certain Aether Raid maps – namely Spring Breeze and Lava Floes – have been adjusted due to their overwhelming popularity. Attacking players can now gain more of an advantage vs opponents on these maps.

Also worthy of note is that this season will last from today until 11th of February, 11:00PM UTC. You have only 5 days to reach your desired tier instead of the usual 7 days. Good luck!

New weapons skills and weapons to refine have been added

The following image shows us the new weapons and their refines: 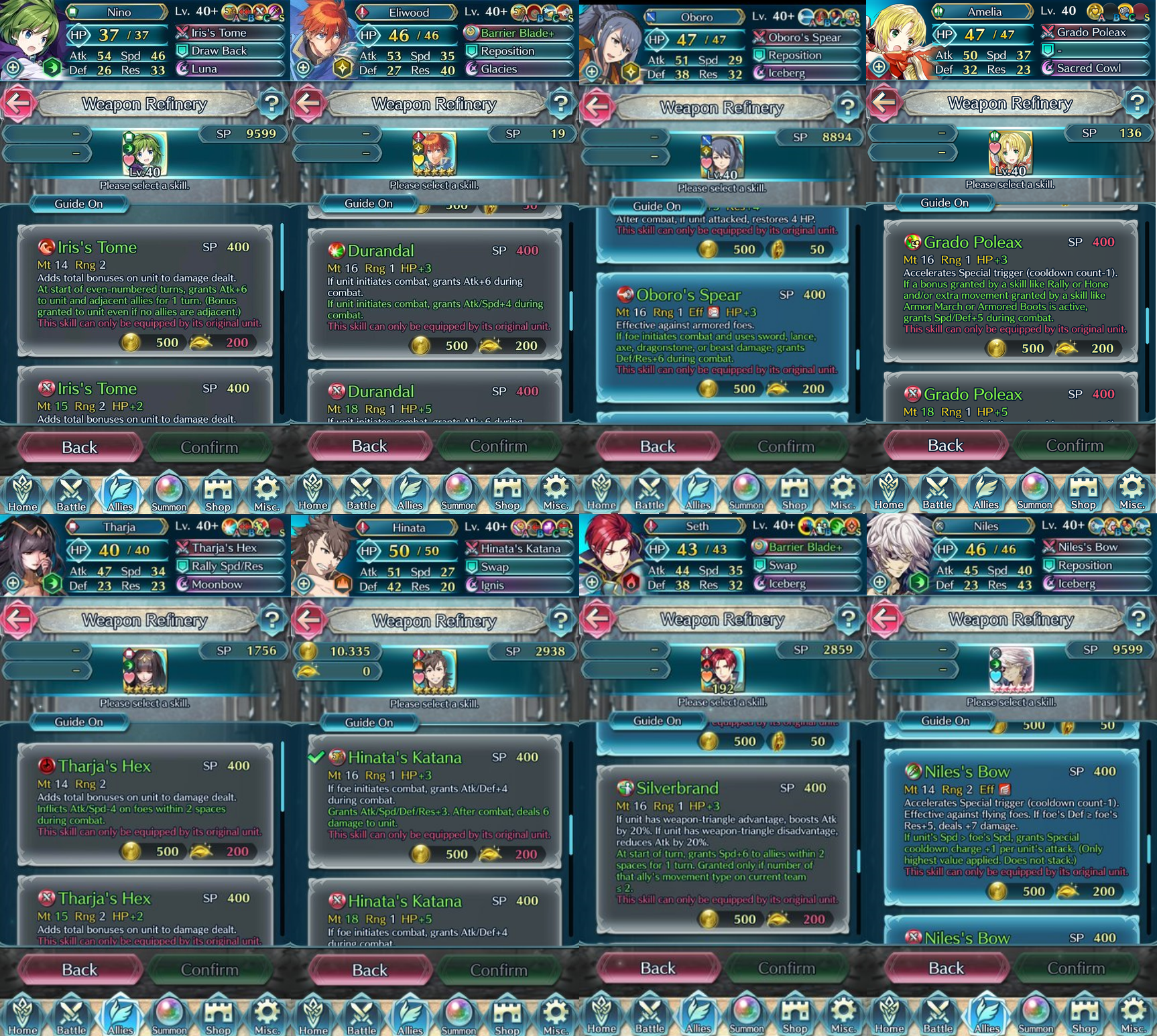 If you have been waiting patiently for merges to your Winter Cecilia or New Years Laegjarn, the wait is over.

Extra 4-Star copies of Cecilia: Festive Instructor and Laegjarn: New Experiences are finally available to be unlocked with your Heroic Grails.

As was covered a while back, Prayer Wheel has now received a buff as a result of a bug that is now being turned into a feature. You can read the previous article for more information.

Within an update due for March, the number of skills that can be transferred from ally to ally via Inherit Skill will increase from three to four.