To say it’s taken a while it’s an understatement, but the Fire Emblem Fates art book is finally fated to arrive on 25th April 2019, in Japan. This information was provided by the Nintendo Dream editing team. 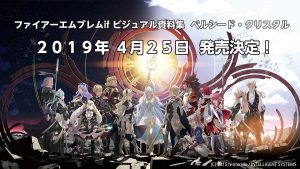 The art book’s full title is “Fire Emblem Fates: Visual Guide – Pellucid Crystal”. It’s produced by the team behind the Tellius and Echoes books, and is fully supervised by Intelligent Systems. Currently, it’s available to pre-order on Amazon Japan.

The book itself contains 320 pages, which cover various character artwork, taken from in-game visuals (including the Private Quarters) and concept designs. In addition, there will be movie scenes, outlines of the storyline of all three paths, plus details regarding the world and story.

When this news was announced, the game’s artist–Yusuke Kozaki–cautioned fans that the art book will not contain official artwork for every character. So those wishing to buy the book to see all the official artwork should bear this in mind.

But I should mention, not every character has an individual illustration. I know this is probably frustrating for those wishing to buy the book and expecting otherwise. To make up for that, I drew a spectacular piece for the book’s cover.

I’m guessing Mr Kozaki has simply been too busy to finish all the artwork in time. As you may know, he’s a pretty famous artist in the videogame sphere and probably gets a lot of job offers. Including from Intelligent Systems themselves, to draw the key characters from Books I and III of Heroes.

However, Mr Kozaki expressed his desire to have all of the artwork finished during a “future opportunity” and asks fans to wait patiently, if possible. So it seems all hope isn’t lost. From this, it seems like he isn’t burned out from drawing Fire Emblem just yet.

I’m planning to create another opportunity to release something that will have everyone’s official artwork, perhaps? If you are able to continue waiting, I would be delighted. I am extremely sorry for making you all wait so long.

In the meantime, to make up for this, Mr Kozaki said he designed a stunning cover illustration for Pellucid Crystal, to thank the fans who have been waiting. The cover illustration will be revealed on 16th March 2019, presumably during the Cipher Series 16 pre-release livestream.

However, regarding the cover illustration, I put my full body and soul to express my feelings of gratitude to everyone who has been supporting Fates so far.

About the Fire Emblem Fates book, I was told by Mr Tsutomu that the cover illustration will be revealed during the NicoNico live broadcast on 16th March.

Felicia
By the way, for those curious, here’s the current timeline of all the currently released Fates official artwork:

Only the first twelve pieces (shown above) have been released in high resolution.