Heroes: Information on upcoming Voting Gauntlet, and VG Banner up!

A new Voting Gauntlet titled “Destructive Forces” will begin on the 1st of April, 7:00am UTC. The bracket is shown in the image below. 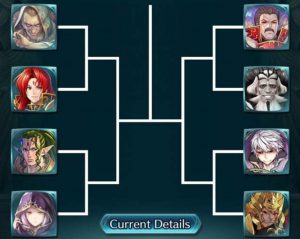 Gharnef, Julius and Garon are Grand Hero Battle rewards that you can recruit by using Heroic Grails, should you not own one but wish to use them for this VG. The other five are Duma, Hardin, Idunn, Grima (male), and Surtr.

There are a few new additions to the Voting Gauntlet. The first of which is the addition of Battle Ballots (BB) (Voting Gauntlet-exclusive stamina). 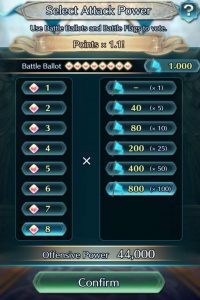 This stamina system works exactly as the Grand Conquests-exclusive stamina does. You must use the stamina to play, but using more stamina at once will multiply your score by however many BB you used. They refill at a rate of 1 per hour. I’d advise holding off using them all at once too early, because they will be more effective later on when bonus multipliers are bigger. But at the same time, it’s a waste to keep the BB stored and unused, so use as many as you think you will need to if you are planning to sleep or if something IRL is keeping you from playing for a few hours.

For example, the best case scenario you could hope for is if the 7.5x multiplier is active, you use 800 flags (100x), use a bonus Hero (1.1x), use 8 BB (8x), that equates to 660,000 points for 8 hours-worth of BB-saving. Holding out is a risky maneuver, however, because that involves predicting your army will receive stronger multipliers. And there are no stamina refills in the Voting Gauntlet like there are in Grand Conquests.

The second change is that the army with an advantage will also receive a multiplier!

As with every Voting Gauntlet, there’s usually a banner to accompany it to give us the chance to summon a few of the Heroes taking part in the VG. 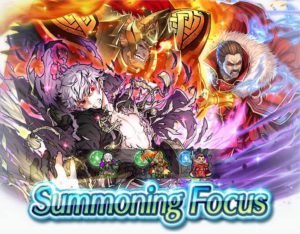 This three-unit banner features Surtr, Grima (male) and Hardin as focus Heroes. The banner begins today and will end on the same day as the Voting Gauntlet – the 7th of April, 6:59am UTC.