Fire Emblem Heroes has announced more details for the next Tempest Trials+ event, “Taste of Spring”, which starts on 24th April 2019. 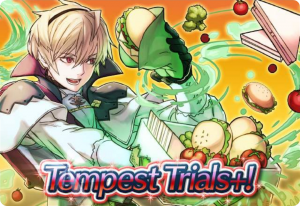 As we learned earlier, the free 5-star Hero will be Leo: Extra Tomatoes (green-tome cavalry). Meanwhile, the available Sacred Seals include Chill Atk 1 and Wind Boost 1–and also Even Res Wave 1 (thanks to kaz_kirigiri for digging this up!).

The bonus Heroes that grant a score bonus aren’t too surprising. They include the four Heroes from the recent seasonal banner: the picnic versions of Lukas, Genny, Felicia and Flora. Plus Leo from the Tempest Trial. Finally there’s Alm, Faye and Kliff just chilling. 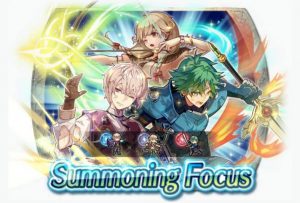 If you’re lacking the last three or want additional copies, there’s a Tempest Trials banner available right now that features them. This is probably the best chance to snag Alm (epic dragonslayer) and/or Faye (Firesweep Bow) after they were removed from shiny new banners.

Finally, in case you missed it, a new Tap Battle started yesterday called “Heartstring’s Ties”. This one celebrates the releases of Shadow Dragon and the Blade of Light, Path of Radiance and Shadows of Valentia, which all released on the same day.

Also, if you were wondering about the new accessories (Picnic Lunch and White-Flower Crown) equipped by the generic foes in the latest Paralogues, these can be earned by clearing the Tap Battle Quests.