It may have been teased just yesterday, but we sure didn’t have to wait long for the full reveal of the upcoming bridal-season units for 2019. This year brings us our third batch of bridal darlings, and surprisingly, we have a few new faces!

Yes, new faces Tanith and Sigrun, from the Tellius series (Path of Radiance / Radiant Dawn), and Pent, from Elibe (Fire Emblem), join Fjorm‘s alt in the cast of the summonable quartet. With these new units, there are several new skills hitting the fray, including Fjorm’s Ground Orders 3, Tanith’s Harsh Command+, and Pent’s Pulse Smoke 3. Additionally, Fjorm’s weapon possibly introduces a new mechanic of skill simplification, with the [Isolation] ability. 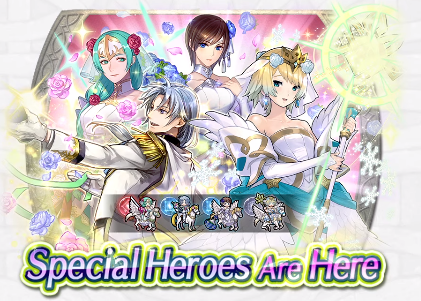 For those familiar with Clarine and Klein already in the game (or from Fire Emblem: Binding Blade) Pent is their father, and his wife, Louise: Eternal Devotion (a Colorless Bow Cavalry), joins him as a Tempest Trials+ reward unit. They’re noted as being a pretty influential duo in their own game, as well as one of the only units that come with a pre-defined support rank, in the entire Fire Emblem franchise.

This batch of heroes will be available for summon on May 21 at 12a PT, and of course, they’ll come with a set of paralogue chapters that provide Summoners with precious Orbs with which to summon them with (or save, of course). They’ll be available for 30 days, so don’t fret if you can’t get them immediately.

For full artwork on the summonable units, click here.

For more details on the unit’s skills, click Read More.