Famitsu has teased their 3rd Three Houses article, which will appear in their 13th June issue releasing on 30th May 2019. This one will discuss the beginning of the story, activities at the Officer’s Academy and the battle system (including Gambit Boosts). 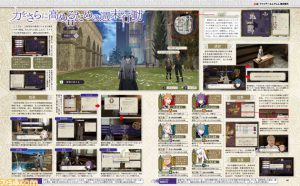 As usual, there’s a preview of one of the double-page spreads, which is unfortunately too small to make out the precise details. That said, it’s clear there will be brand new profiles for Ashe and Lysithea–who will probably be profiled by the official Twitter and website later this week. 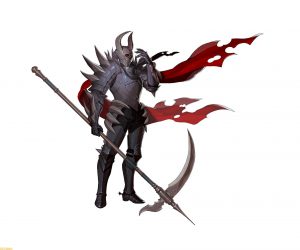 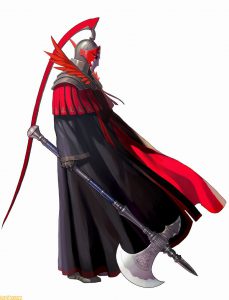 On top of that, Famitsu provided images of two presumably villain characters. They are known as the “Reaper Knight” (or Death Knight or Grim Knight, you get the picture) and the “Flame Emperor”. Apparently they have a serious grudge against the Garreg-Mach Monastery.

Anyway, I tried my best to analyse the tiny preview image, but it’s no easy task. Besides, the full issue will be out within 2 days.

The main agenda is the calendar and weekend activities, introduced in the 2nd Famitsu article. The big screenshot with female Byleth standing around is highlighting the map of the academy. You can toggle a full map of the academy (shown in the top-right corner), which probably indicates where all your students can be found. 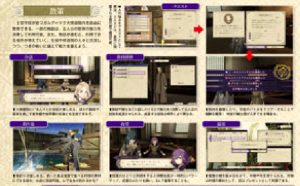 Next, the focus shifts to one of the things you can do during the weekend: Stroll. This lets you wander around the academy, similar to the dungeon exploration in Echoes. While strolling, you can partake in various activities such as quests (which give rewards when completed, obviously) and even fishing!

There are four other activities, but I can’t read what they are. The screenshot near the middle of the bunch seems to involve Hanneman. Since he’s the crest researcher, I wonder if it’s related to crests? I’m guessing dining will be one of the activities as well.

Also, from what I understand, you consume the Stroll Gauge to trigger an activity, similar to the Instructor Gauge during lessons. This will appear as a number and bar along the top of the screen when you’re strolling. Likewise, the maximum value of the gauge can be increased by raising your Instructor Level. 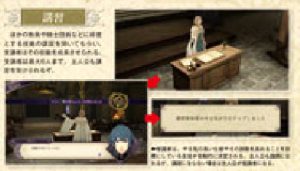 Afterwards is a small section explaining the Class option. Like Stroll, this is only available during weekends. From the screenshot, we can see Manuela giving a lesson–but unlike normal lessons, I think it’s Byleth who’s being taught! I know some people were wondering how to raise Byleth’s Professor Levels (outside of battles)–and I think this is how. 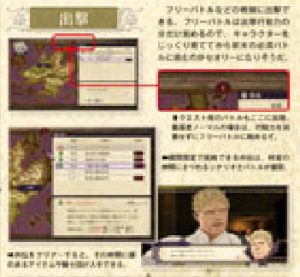 The next weekend activity is Venture aka Sortie. Again, it’s really hard to see what’s going on, but the map of Fódlan is definitely involved. From the name, it’s not hard to guess that this might involve optional skirmishes, outside of the story battles. That said, it could simply involve sending out students to fulfill tasks, without any battles.

Regardless, this option also has a gauge attached: the Venture Gauge. Whatever venturing is about, it seems to be important enough to have weekly restrictions.

Last but not least is the option to Rest. Your guess is good as mine here, since the screenshot is far too tiny for human eyes. I imagine it probably ends the weekend without doing anything. Useful if you just want to rush through the story. 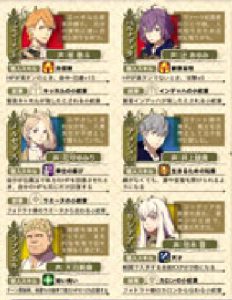 In terms of the character profiles, we have the 3 students from last week (Ferdinand, Mercedes and Raphael), Bernadetta from Monday and Ashe and Lysithea, who are probably scheduled for Wednesday and Friday. Giving the timing, Famitsu will reveal Lysithea first, but the official channels should post about Ashe first.

Given their surnames, it was easy to guess that Ferdinand (Aegir) and Bernadetta (Varley) are crest-bearers, but so too are Mercedes and Lysithea. Strangely, I’m not 100% sure but it seems none of the four crests share names with the characters’ surnames or locations on the map–which was the trend with previous crest-bearers.

However, there may be good reasons for this. Firstly, Ferdinand and Bernadetta seem to have crests that do not belong to the Ten Greats of Fódlan. Bernadetta has a crest belonging to the Divine… Indul? In any case, it seems to be a crest bestowed to a saint, similar to Seiros. I can’t read anything else about Ferdinand’s crest.

Mercedes and Lysithea both have crests belonging to the Ten Greats. I think Mercedes’s crest is Lapine. I can’t read Lysithea’s. That said, I think Lysithea comes from the Ordelia family (or could be Cordelia, but Ordelia is a place on the map). Her personal skill also seems to be Prodigy, similar to Caeldori from Fates.

Wait, hang on a second… Caeldori is a Cordelia expy. So this seems to be an intentional reference. The only strange thing is that the character Cordelia from Awakening is known as “Tiamo” in the Japanese version. So if they were planning a sly reference, I would’ve figured they’d use her Japanese name (seeing as the developers are Japanese).

Speaking of personal skills, it looks like Mercedes has Live to Serve, a healer class skill in Fates and Heroes. Well, she does look like a healer. The other personal skills I can’t really decipher. Also, before I forget, I think the four crest-bearers all have minor crests. But again, I’m basing this off text meant for ants.