Today, the Japanese official website for Three Houses updated with some gameplay details–specifically related to the education part. A lot of this info was covered by Famitsu and whatnot, but we’ll go through everything anyway. Plus there are some cool tidbits.

As a Teacher and a Commander

For those not aware, one of the key features of the game is the officer’s academy, where students study the art of battle. You–the protagonist–are a teacher and it’s your job to nurture and guide your students, as well as directing them on the battlefield. 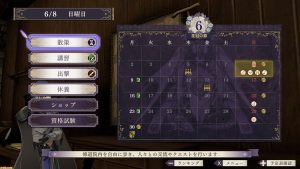 School life is divided into months (also known as seasons). At the end of each month, there is a field study that involves a fully-fledged battle. Until then, it’s crucial that you use your limited time to prepare for the tasks ahead.

One way to get stronger is to take examinations for particular classes, which–if successful–allow the character to Class-Change (generally to a stronger class). In order for your students to meet the requirements, you will devote your weekdays to teaching students.

Weekends are a time to relax. You can go wandering the monastery, interacting with various people. Or if you’re diligent, you can engage in skirmishes alongside your students or do some studying yourself.

It’s completely up to you how you spend your time preparing until the next field study.

The featured screenshot shows the calendar for the 6th month, the Flower Crown season. For more details, please check the 15th May Famitsu article (search for “calendar”). 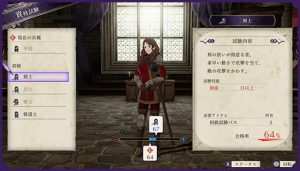 The main purpose of education in Three Houses is for students to pass examinations for a wide variety of classes, thus allowing them to Class-Change to stronger classes.

Depending on the class, certain aptitudes are required, like sword skills or horse riding skills. These are known as professor levels. As a teacher, the protagonist can identify the individual talents of each student and support their growth via a multitude of educational methods.

The above screenshot shows Dorothea before attempting to take an exam to Class-Change from Commoner to Myrmidon. The other available classes are Soldier, Fighter and Monk–all Beginner classes. The exam asks for a minimum of a D professor level in Sword. A Beginner Pass is required too, of which the player has 3.

The pass rate is 64%, which isn’t low, but far from guaranteed. I think the red text for the Sword level means that the minimum level hasn’t been achieved. 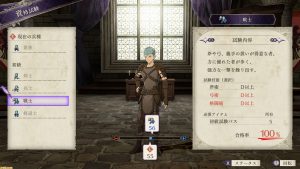 In an earlier screenshot of Caspar, some of his professor levels have black text instead, which could mean that the target is met.

Also, there are two numbers below Dorothea. A 64 below an “E” symbol and a 67 below the Myrmidon icon. I actually can’t think of what these numbers mean. The 64 is probably unrelated to the pass rate. The same screenshot of Caspar shows a 100% pass rate despite the number below the “E” being 55. 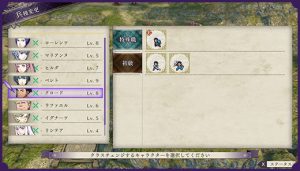 The next screenshot shows all of Claude’s available classes. A character can freely Class-Change to any class they’ve passed an exam for, without needing to take the exam again or using an item. Basically they’ve earned the qualifications. Claude can Class-Change to Noble, Myrmidon or Fighter.

This screenshot also appears to be from the battle preparations since you can see the battle map behind it. More interestingly, looking at the space available in the window, it seems there’s space for up to 5 tiers of classes. I’m assuming when a row of the same tier is filled up, you can scroll right.

So far, we know of 3 tiers. Commoner and Noble–the trainee classes–are classified as Special classes. This is also their classification in the Cipher card game. Next, from Level 5+, there are 4 Beginner (aka base) classes. After that, from Level 10+, there are 12 Intermediate classes (some are exclusive).

From there, there is definitely going to be Advanced (aka promoted) classes. Maybe from Level 20+? These would include typical promoted classes from other games like Paladin, General, Sniper etc. That makes 4 tiers so far. Finally, I have a feeling there may be an additional, 5th tier beyond Advanced.

Logically these would be Supreme classes like the 3rd Tier classes in Radiant Dawn and Echoes. So stuff like Gold Knights, Dread Fighters, Archsages, etc. I’m not too sure what the Level requirement might be though. Remembering Level isn’t reset after Class-Changing. Maybe 30 or even 40?

A better question to ask is what could the maximum Level be? 40 seems pretty reasonable, since that’s more or less the combined Level for a character’s unpromoted and promoted career in a typical game. But it could be 60 like Radiant Dawn/Echoes. If so, maybe the next requirement is 40 after all. 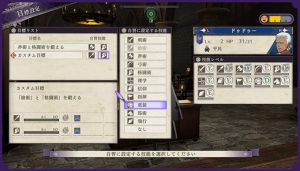 In the first screenshot, the player sets a custom focus for Dedue of Lance and (soon to be) Heavy Armour. By default, Dedue’s focus is Axe and Fighting. We know that he’s good at both. But he’s also good at Lance and Heavy Armour, so that’s also a good focus to try. 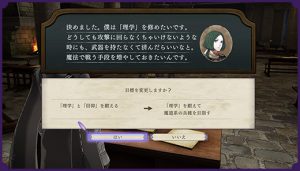 As for the second screenshot, Linhardt is suggesting to focus on Reason, with the aim to progress in magical-based classes. The player is given the option to accept his suggestion or turn it down. It’s currently unknown what benefits a student-suggested focus has and if they’ll reappear after being declined.

If you want students to develop specific professor levels, the Tutoring option is recommended. While teaching, you should be aware of which professor levels a student is good or bad at (indicated by up or down arrows).

Choosing a professor level they’re good at will help accelerate their growth. But it’s not a bad idea to choose one they’re bad at. By continuing to develop a poor professor level, students may discover hidden talents (possible by selecting professor levels with 3 empty stars).

The website doesn’t state it, but when a hidden talent is unlocked, the bad stat becomes a good stat and the character may learn a skill or Combat Art.

If you’re lazy, you can choose “Auto-Tutor” and the game will automatically tutor your students for you.

The video shows female Byleth tutoring Felix from the Blue Lions. He’s good at Sword, Bow and Fighting, but bad at Reason and Authority. He has 3 empty stars in Reason, indicating he can learn a hidden talent. Also, there’s an Instructor Bonus for Sword, Lance and Authority. His focus is Sword and Fighting.

First, the player chooses Sword as the professor level to tutor. Felix gains 4 (Base) + 2 (Strength) + 2 (Instructor Bonus) for a total of 8 exp. He needs 156 more to reach C+ so he’ll need all the exp he can muster. During a Great result, he gains 1.5x exp; during a Perfect, he gains 2x.

Normally, Felix’s Motivation bar (with the smiley face icon) depletes after being tutored. Once a student’s Motivation is depleted, they cannot be tutored for a while. But after he gets a Perfect, the protagonist can compliment him, increasing his bar up one stage (by 25).

Next, the player goes back and chooses Authority which he’s bad at. He gains 4 (Base) – 2 (Weak) + 2 (Instructor Bonus) for a total of 4. Could be worse, it could be 2. The result is Bad, which seems to give 0.5x exp. So he ends up gaining 2 anyway. Ouch. However, by comforting him, he gains Motivation.

Working Together for Group Tasks

Every week, you can send two students to undertake a Group Task. Depending on your choice, you can increase certain professor levels and build up support levels between the students.

The video shows Edelgard and Petra doing a Flying-related Group Task. Before choosing, we can see Hubert and Dorothea are bad at Flying, but Petra is good at it.

Also, we can see some of Edelgard’s support levels. From what I can tell, she has C, B and A available for Caspar, Bernadetta and Dorothea. But only C and B for Petra and no A. Maybe it’s tied to progress? Or simply not there?

Correction: Fixed the part about Edelgard’s support levels after watching the video at higher quality.

After choosing Group Study, it becomes ticked in the Lesson Plan menu. Right, it’s literally a plan. To start it, you choose “Start Class” at the bottom. Presumably you can choose multiple options, provided you have enough Instructor Gauge to spend, along the top of the screen.

Anyway, Edelgard and Petra are testing anti-aerial defences by riding on pegasi. While doing so, they seem to have some unique idle chatter. All of this is voiced as well! I imagine the dialogue is repeated if you pick the same character and task though.

At the end, the two gals report on their results. Petra goes from 80 exp required to 62, while Edelgard goes from 32 required to 20. So they gained 18 and 12 exp respectively. In addition, the pair gain support points, while you get 1,000G and 5 Forging Stones.

Of note, Petra remarks about wishing Adrestia and Brigid to co-operate like she and Edelgard did. This strongly implies that Petra comes from Brigid, the island nation towards the south-west of Adrestia. She does look somewhat different to the other Black Eagles and her speech is a lot more basic, like a foreigner’s.

Now I’m extremely curious if we’ll get more characters from the other nations surrounding the three main ones. We do know Dedue comes from the Daska region, which is apparently to Faerghus’s north-west. Maybe it’s the unnamed island(?) just off the shore and to Albinea’s east? Or is it a location within Albinea itself? 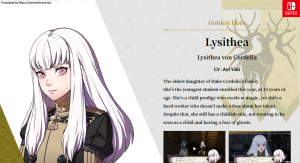 Last but not least, the official site updated with profiles for the Flame Emperor, Reaper Knight and Lysithea. The profiles for the former two don’t have much in the way of new info, but Lysithea’s profile does go into more depth versus her basic one in the recent Famitsu issue. You can also check out some of her dialogue in this video.