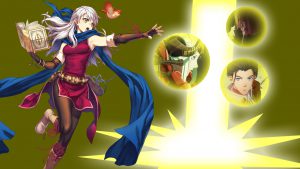 If you’re not aware of the leak’s history, back in mid May, thanibomb created an AMA (Ask Me Anything) thread on Reddit, claiming she knew “quite a bit about Three Houses” thanks to her informants. You can find the original thread here.

At the time of writing, there are nearly 2000 comments, so it’s a bit of a monster to navigate. Thankfully, another user, NutOfDeath, created a compilation post with most of thanibomb‘s claims.

There’s a lot to go through, so I’ll point out some of the more interesting claims that were made ahead of time. But feel free to check out the posts at your own leisure! 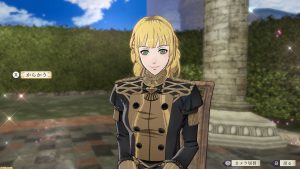 Using the compilation post as a reference, the first thing of note is that thanibomb mentioned that the game features a more socially acceptable form of skinship–the face-petting feature from Fates (which was heavily edited for the Western release). This later turned out to be the tea party mini-game revealed in the Famitsu article for 20th June.

Indeed, thanibomb even mentions that it’s like “high tea” and there may be “intense staring”. During a tea party, if you can keep the conversation going, you can enter a free time session where you can view your partner from different camera angles. There are also button prompts to tease and try and make your partner laugh.

Many people were curious if you could recruit students from other houses. Which thanibomb responded by saying you recruit one student but not a house leader or retainer. This is somewhat true, as we now know you can scout other students, but house leaders and certain characters (who we don’t yet know) are exempt.

However, it appears you can recruit at least two (as the Treehouse Live team had both Raphael and Ignatz in their Black Eagles playthrough) and maybe more. That said, it’s possible things changed or she remembered wrong?

I’ll jump ahead a little bit. Apparently anyone can become a dancer/sincer unit (with the ability to give allies another turn) via Manuela. But you can only have one at a time (presumably for balance reasons). Also, Dorothea is the canon singer.

Currently, this piece of information is still up in the air, but we do know Manuela and Dorothea both come from an opera company, so it’s fairly plausible. 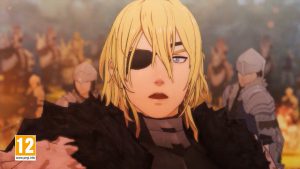 Next is something incredibly hard to guess. thanibomb mentioned that Dimitri would gain Sword, Authority, an eyepatch and better hair on promotion. I think this info is actually slightly mixed up, but nonetheless true.

Obviously, the eyepatch and better hair is from his grown up version 5 years ago (which thanibomb also predicted). But the promotion seems to be referring to the house leaders’ shared Lord intermediate class, as Lords are proficient in Sword, Lance (which he’s already good at) and Authority.

I spoke to thanibomb and it seems Dimitri’s final class will be infantry-based. That said, things could have changed during development. If true, Dimitri would be really similar to Ephraim, the first Lance-maining Lord. On the other hand, we do know Dimitri is good at Riding and in the E3 demo, they made him a Cavalier.

On the same subject, apparently Dimitri faced trauma in his past and during the story; a lot of his development comes from him battling mental health. After seeing older Dimitri’s appearance and actions in the E3 trailer, I can totally believe this. I mean, we already knew Dimitri had a “shadow”, suggesting a dark past. But I don’t think many people could have guessed how bad things were for him…

Part of this trauma may be because Dimitri lost his parents to a bandit attack. Dedue was one of the bandits and the reason he owes a great debt to Dimitri is related to this. Also, as part of his mental health battle, Dimitri can see the ghosts of his dead parents. Poor guy… Furthermore, Dimitri and Edelgard are step-siblings; Edelgard’s mother married into the Faerghus royal family. 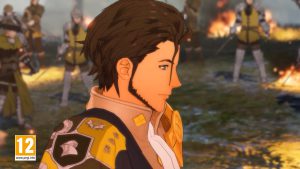 Meanwhile, Claude gains a unique-looking wyvern (with a beard!) for his canon promotion and he gains facial hair (including sideburns). The last bits about his appearance were confirmed as being from his older appearance. Meanwhile we’ve yet to see his wyvern promotion, but it seems reasonable especially if Dimitri is on foot or horseback and Edelgard is armoured (which is another thanibomb prediction).

Speaking of Claude, his father is said to be from the country east of Leicester, so Almyra. Besides Claude, you can recruit at least two other characters from here. Later, thanibomb clarified that Claude’s mother is a von Riegan. Also Claude’s grandfather may have an important role. One of the Almyran recruits may be Cyril, the young boy seen near Claude, although thanibomb had gotten his name mixed up with Alois. 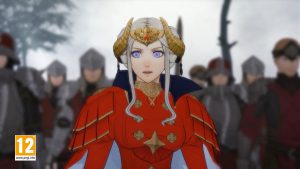 As for Edelgard, she’s said to be a bit more ruthless than previous female protagonists. She’s the “end justifies the means” kind of person. I can believe that. In her older appearance, she was said to sport hair buns, which was confirmed.

Later, she can promote to a class that’s good with Axe, Authority and Heavy Armor, possibly called the “Kaiser”. By the way “Kaiser” was one of the readings for Sanaki’s class name in the Japanese version of Radiant Dawn.

This is the bit that’s probably gotten a lot of people talking. At least during the early development, female Byleth had a number of same-gender romance options including Edelgard, Dorothea and Mercedes. Meanwhile, male Byleth only had Linhardt. So far, we’ve yet to confirm this info, but it’s worth keeping in mind.

More details that would’ve been nigh impossible to guess. Ahead of their reveals, thanibomb stated that the swordswoman seen flying through the air in the February trailer was called “Catherine”–and also that she has a cool nickname. We later learned that her name was indeed Catherine and it appears her title may be “Heavy Thunder” or something to that effect.

Similarly, she claimed that Rhea’s advisor was a Wyvern Rider called Setes and there are characters called Cyril and Alois. She said that Cyril was the knight walking with Jeralt, while Alois was from Almyra. All of this turned out to be true (Setes is actually spelled Seteth), but Cyril and Alois’s names were mixed up. Given the huge amount of info, it’s not unreasonable that she remembered wrong. 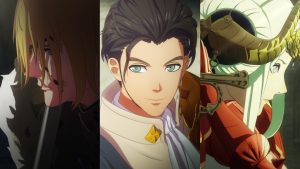 Now for an incredibly bold prediction–and the one I was keeping my eye on at the time. thanibomb clearly stated that there would be a timeskip that’s exactly 5 years. After the timeskip, pretty much everyone has different appearances (logical) and the three houses would become antagonistic towards each other. Thanks to the E3 2019 trailer, we can add this to the growing “confirmed” pile.

Apparently, there are four paths in the game. Edelgard gets two of them (so the other leaders get one each). One of Edelgard’s paths is a “neutral” path, while the other is not a “happily ever after” one. We know, via Nintendo Japan, that the game will branch out into three paths during the war phase. That said, they didn’t say it wouldn’t branch out more. So I think this prediction is worth remembering.

When asked, thanibomb mentioned that the game’s legendary weapons are linked to the crests. Also that each noble house has access to certain crests and weapons. These weapons can be wielded without a crest, but there are “very dire consequences”.

Later, we learned that these weapons are called “hero relics”. Furthermore, in later E3 previews, we can find a mission where a son of Gautier without a crest steals his family’s hero relic. It’s possible his actions cause him to degenerate into a Black Beast… 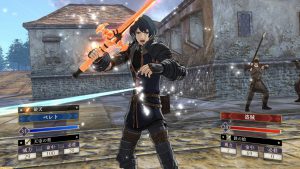 Related to the hero relics, thanibomb correctly guessed that Byleth’s golden blade is called the “Sword of the Creator”, although her exact words were the “Sword of Creation”. Close enough though, especially assuming she got her information from Japanese sources.

One of thanibomb‘s favourite characters, other than the house leaders, is Lysithea. She mentioned that Lysithea has a tragic past, involving crest experimentation. She also said that she’s fated to die fairly early on, during or sometime after the time skip. We do know Lysithea survives the time skip, so if this detail is true, she’s probably not long for the world. Nooo…

Marianne apparently has a similarly tragic background, although it sounds like she’s better off. Her family has a cursed bloodline, so she distances herself from others. We do know she’s the shy type and rarely interacts with other people. Plus she has a completely unknown crest, which resembles the crest in Edelgard’s relic axe. Hmm, very suspicious.

I chatted with thanibomb about this a little more. Apparently Marianne is descended from one of the Elites–the legendary heroes who fought alongside Seiros in the distant past. He was called Maurice, but his name was erased from history because he became a Black Beast, massacring many. thanibomb wasn’t sure if Maurice was the 11th Elite or replaced afterwards.

Finally, Rhea and Sothis can apparently both be recruited. But this wasn’t always the case early on. It seems the team were going to have NPCs as possible romance options. However, they may have later decided to elevate Rhea and Sothis to playable status. Perhaps some of the characters we’ve only briefly seen, like Flayn, Cyril and Tomas, may simply be NPCs?

By the way, I’m aware that Sothis is one of the featured units for one of the paralogues in the Treehouse Live footage. That said, she may be featured in dialogue only (like the students from other houses not under your wing). We know that she resides in the protagonist’s room, yet when the player views the monastery map, Sothis is not listed as a character you can interact with.

A big thanks to thanibomb for sharing these details to us and for responding to my queries!