The on-going Japan Expo in Paris has been the source of some recent Three Houses information. 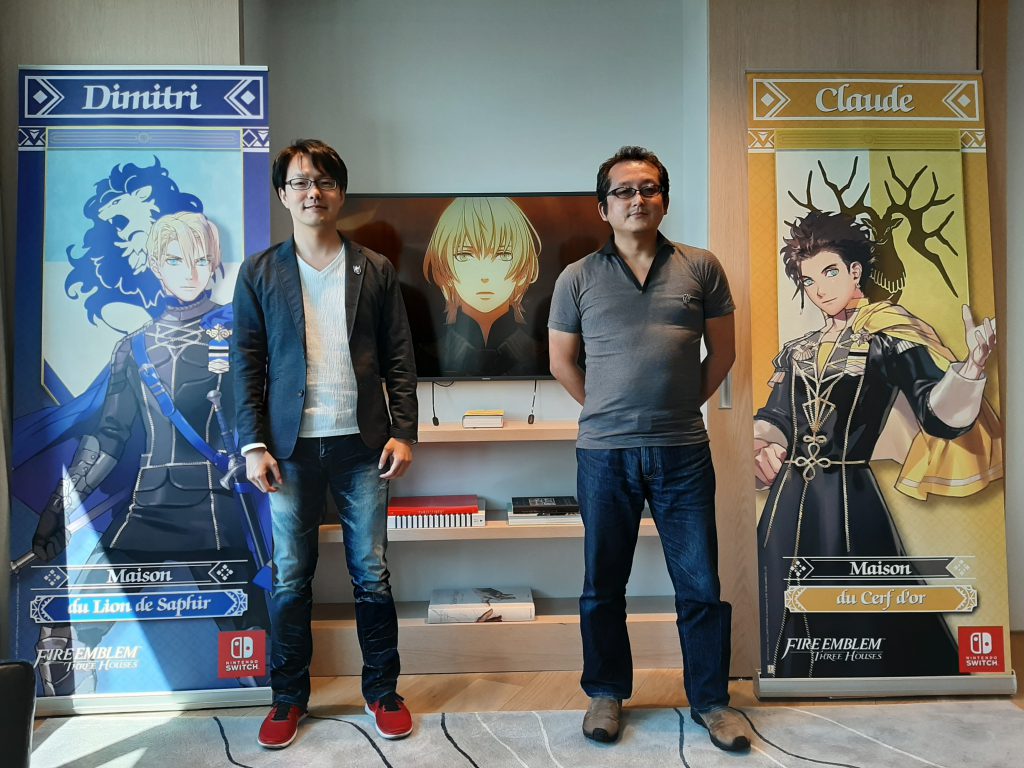 Toshiyuki Kusakihara and Genki Yokota, who came for the Three Houses live demonstration, were interviewed by Jeuxvideo. I am unfamiliar with French, but fortunately, machine translations are pretty good (unlike how they are for Japanese).

To begin with, they mentioned how this is the first home console Fire Emblem since 2008’s Radiant Dawn, which was released on the Nintendo Wii.

They discussed Koei-Tecmo’s familiarity with tactical simulation like games, such as Romance of the Three Kingdoms or Nobunaga’s Ambition to name a few. Saying that their passion for the genre, along with them handpicking developers who liked Fire Emblem to begin with, was part of why the project has gone so smoothly. 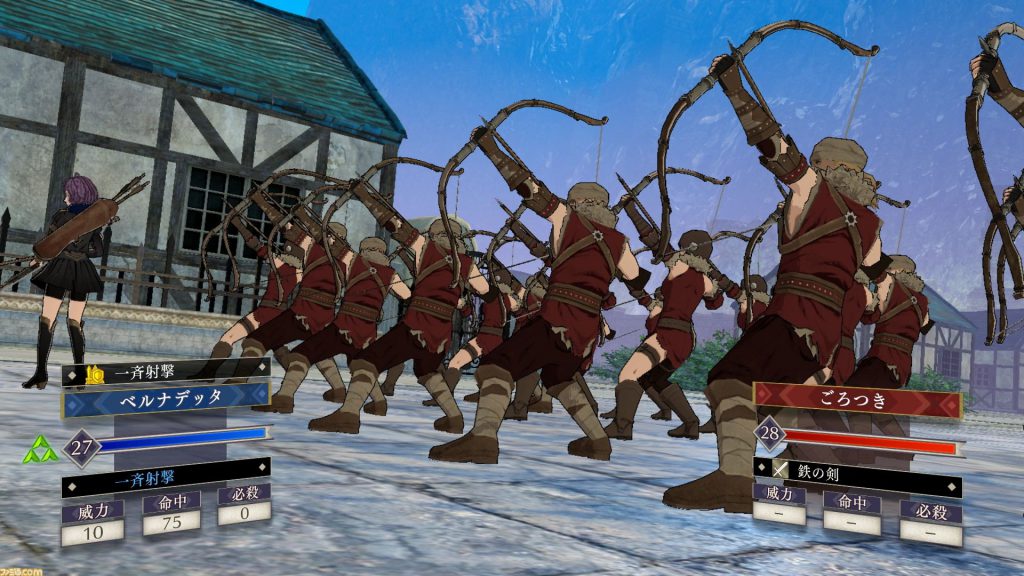 Intelligent Systems managed the artistic direction and game design while Koei-Tecmo did the programming.

The folks at Jeuxvideo compared the calendar system to Koei-Tecmo’s Atelier franchise–how you progress through the game while following the calendar, trying to prepare yourself for what the game will throw at you next.

Next they go into the differences between the Monastery and My Castle (from Fire Emblem Fates).

Yokota: The My Castle system was interesting because you could build it up yourself. But the ambitions we had with the Monastery were much larger and harder to achieve using a similar system. We wanted to give this feeling of shared life; while you created your own My Castle from scratch, in Three Houses, it is already established. The characters have lived there for years and, for them, it’s a place of life that they can call home. So it was designed this way to create that kind of mood.

Global Activity: For each of the choices, such as instructing students, there is a percentage that shows what other players have chosen. This is a good way to observe the trends and potentially influence your decisions.

Exchange Student: It is possible to “send” one of your students to other players’ monasteries. You can choose to give him/her an item to offer to other players, if they wish to buy it. When receiving a student from another player, they can be used in combat as an assistant unit [for the pair up system], under specific conditions.

Lost Spirits: In optional battles, there are tiles called Lost Spirits, which indicate areas where other players have encountered difficulty. Successfully surviving on these tiles grants additional bonuses due to the higher difficulty.

The Lost Spirits mechanic reminds me of Super Mario Maker oddly enough, where after dying, you can see spots where other players have died.

Also they stated that there are no multiplayer battles or similar PvP features. 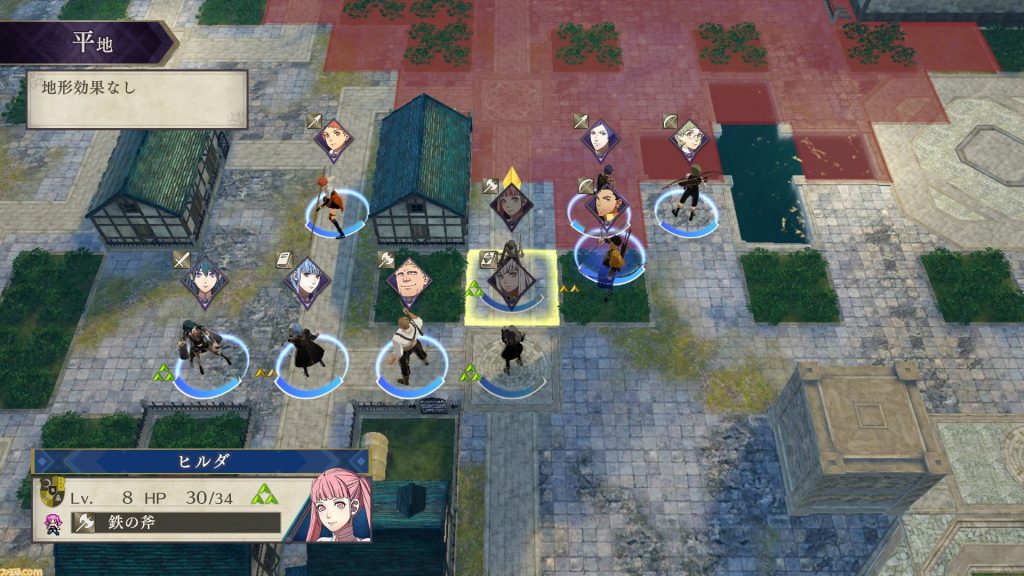 Hey it’s my house! Comment below which house you’re planning on leading

Next we head into proper gameplay discussion. Starting with the weapon triangle.

Yokota: The weapon triangle system hasn’t disappeared, it’s just less visible. Will we see it again in future games is difficult to say since we’re working on themes and game mechanics first before thinking about importing features in it. What we wanted to do in Three Houses is to give player freedom in tutoring their students, so that the player can give their favorites students whatever they want in weapons and skills. It helps the player identify with the team they’re raising.

(Thanks to forum member Ycine for translating this paragraph!)

What he means is that the weapon triangle is absent, but it’s possible to restore its effects via certain abilities. For example, you can unlock the Swordbreaker ability by increasing your Lance skill level. This will give your unit an advantage when using lances versus swords.

They then go into how the Switch’s hardware allowed for concepts that would have been impossible for the 3DS. 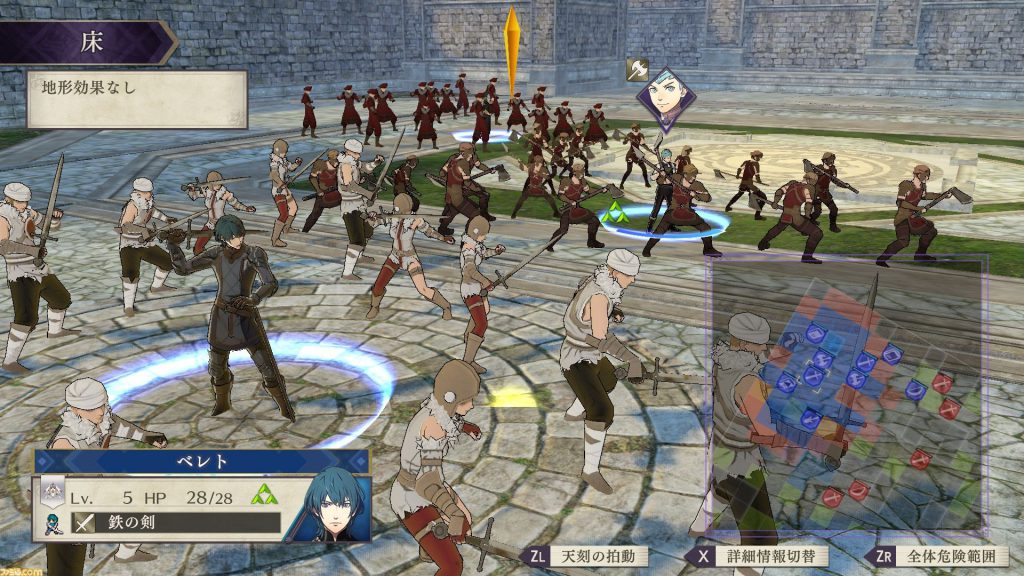 The battalion system and the sheer number of characters on screen are among those additions, along with Koei-Tecmo’s experience in this genre.

Kasukihara: Thanks to the improved technical capabilities and screen resolution over the Nintendo 3DS, we could add more visual elements. For example, the use of battalions that support each unit–this was not possible beforehand. That said, there is another perhaps surprising side effect from switching to Nintendo Switch. As there’s a full HD screen, it was nice that we could show more text, like putting the names of each combatant on the screen. In addition, as we have more space for text, we could add pages that delve into the backstories of the characters, to enrich the game’s lore.

They also briefly go over the amiibo functionality, which confirms again that Fire Emblem amiibo unlock music from their respective games to use in the auxiliary (optional) battles. Which to recap would be Marth, Ike, Corrin, Lucina, Chrom, Alm, Celica, Tiki, Roy, and Robin.

Finally we come to the biggest bombshell of the entire interview. According to Kusakihara, it took him roughly 80 hours of game time to play one of the three routes in Three Houses.

Kasukihara: To complete the game with just one of the three houses, it took me 80 hours. I did not skip the dialogue or cutscenes, of course. So if you want to do the three paths, it can take you more than 200 hours.

Will this game top Radiant Dawn in sheer length? We don’t have much longer to find out Fire Emblem: Three Houses, at the time of this post, comes out in just 21 days.