It’s now 11th July in Japan, which means the next issue of Famitsu is now available to purchase digitally. Thanks to Nintendo Everything, we have the images from the Three Houses feature from the latest issue. This time, there isn’t a lot of new info, but we’ll take what we can get!

The first double page spread, where the preview image is from, is dedicated to the “Demonic Beasts”. These are monstrous enemies far stronger than humans. Not only are they powerful, they occupy multiple tiles and have multiple HP bars. The ones shown include the Black Beast, Giant Bird, Giant Wolf and King of Beasts. All four appeared in prior footage. 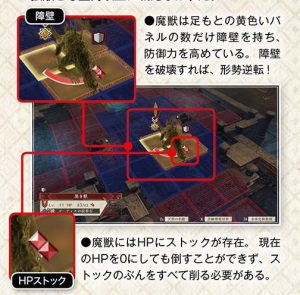 As you may have noticed, there are yellow tiles underneath the Demonic Beasts. These are barriers that provide defensive boosts for the beast, making them harder to defeat. If you can deal enough damage, by using weapons or Combat Arts effective against monsters or Gambits, you can break the barriers. 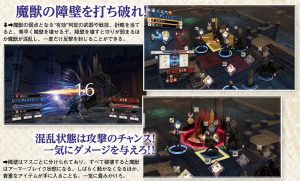 Doing so will cause them to be confused, temporarily preventing them from counter-attacking. After a while, broken barriers will automatically be restored. If you can break all the barriers at once, you’ll inflict “armour break”, which prevents the beast from moving for a while, while also rewarding you with valuable item(s).

Demonic Beasts have “stock” (like in Smash Bros.). After reducing the beast’s HP once, they will lose one stock but regain all HP. For example, if a beast has 2 stock, you need to whittle down their HP bar 3 times. Also, if a unit uses a Gambit, the beast’s attention will be focused on that unit.

Lastly, beasts may gather energy for a devastating attack on the following turn. These attacks deal incredible damage and can hit multiple units at once (essentially, it’s an AOE attack). When the beast is gathering energy, the tiles it will target will change colour, so you know where NOT to stand.

The next few pages are about the monastery facilities.

First in the spotlight is the Drill Grounds, which first appeared in New Mystery of the Emblem. Here, you can participate in monthly weapon-based fighting tournaments. You’ll choose a student to represent the class and if you do well, you can earn some cool rewards, like weapons or items to take exams. 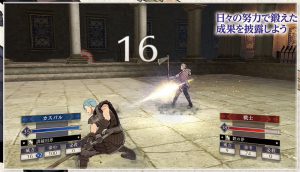 To enter, you must spend 1 activity point for exploring. When choosing a student, you can see the suggested level, their equipped weapon (typically a training weapon) and potential reward(s). Similar to the arena and the old drill grounds, there are multiple rounds. As you progress, the enemies will get tougher, but the rewards will be better.

In-between rounds, you can press the X button to restore 30 HP. However, you can only do this twice per tournament. This likely means your character won’t automatically get healed between rounds. Adding an additional layer of complexity, as you contemplate whether to heal ASAP or save it for when the going gets tough.

The fourth page has a recap of the weekend activities. Famitsu has already gone over this in the past, but naturally, not everyone has been following. There’s the calendar that we all know and love, with the 4 main weekend activities: exploring the monastery, taking/giving seminars, battling and resting. These four options appear to be mutually exclusive.

For those who already know, I won’t bore you with the details. Otherwise, please check our Officer’s Academy page. 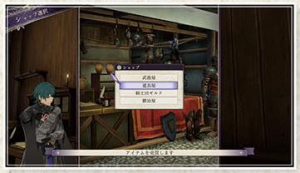 The bottom three options are always available: shop (visit the armoury, vendor, knights’ guild or smithy), certification (check your qualifications or take exams to change class) and skip (ahead to any day within the month).

There are also profiles for 8 characters, but these have already been featured by official sources. For the record, the characters are Alois, Gilbert, Shamir, Cyril, Seteth, Flayn, Jeritza and Tomas. If you’re not familiar with these guys and girls, please check our Characters page for the full lowdown.

Page number 5 talks a bit about new areas of the monastery. At this point, there isn’t a lot new ground to cover. 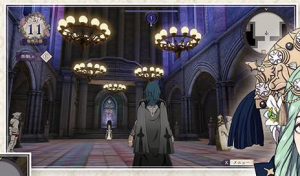 The Audience Chamber is located on the 2nd floor of the monastery. This is where Archbishop Rhea meets other people and where many important members of the monastery gather. Rhea’s office is also located here. Famitsu mentions that you can check the advice box and saint statues here, but I think they made a mistake. The advice box is definitely in the Cathedral at least. 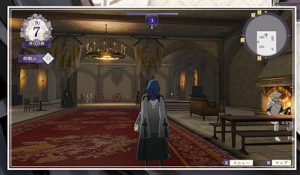 The Knight’s Hall is situated towards the east side of the monastery. As you’d expect, it’s the gathering place of the famed Knights of Seiros. However, students from the Officer’s Academy are also allowed to enter. Here, you can receive faculty training (to boost the protagonist’s skill levels) from distinguished knights.

The bottom half goes on about amiibo and online functionality.

Towards the east side of the monastery, before you reach the Knights’ Hall, you can find the amiibo Gazebo. If you scan an amiibo figure, a random item will spawn in the vicinity of the gazebo. If you scan a Fire Emblem series amiibo, you might get something good! (Like music to use during optional battles.) 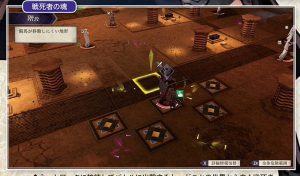 Lost Spirits were mentioned in the Jeuxvideo interview. If you connect to the Internet (and have a NSO subscription), you may find otherworldly tiles scattered around battle maps. These indicate places where other players keep meeting their doom. Purple spirits give you items, while yellow spirits give experience points and restore weapon durability.

Likewise, you can encounter “Exchange Students”, which are characters from other peoples’ games. If you speak to them, you can buy an item from them at a cheaper price than a normal store, play a mini-game or hire them as an Assistant for the game’s Pair Up system.

The top half of the last page is more recapping and a few loose ends. It discusses several of the side activities while exploring. I won’t go over all of these; please check out the Officer’s Academy page instead. For reference, they’re: converse, tea party, faculty training, quest, dining hall, fishing, greenhouse, recruiting from other houses, lost items, gifts, choir practice, advice box and saint statues. 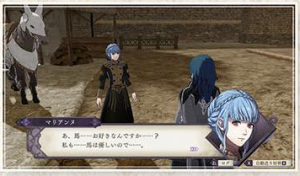 The Stable is where horses, a valuable method of transportation, are kept and raised. You won’t find much to do here, except bumping into students who like animals. Hmm, maybe you can see them petting the horses? 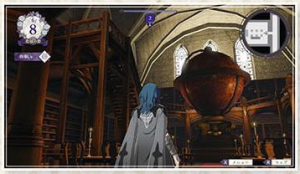 There’s a huge Library in the monastery, which houses a plethora of pertinent information, including a complete record of the history of the continent, as well as the Church of Seiros. You may also find students studying hard here. Were you one of those? 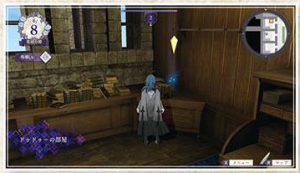 Each student has their own Dormitory. Inside, you can find literature related to the students’ favourite hobbies. Reading these can increase the protagonist’s Professor Level. But is it really alright to poke your nose into their private life? The room in the screenshot is Dedue’s, by the way. 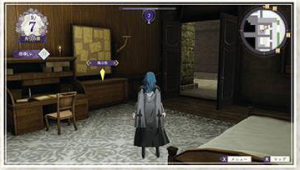 Finally, the protagonist has their own Personal Quarters, in the same area as the dormitories. While exploring, you can review quests from the bulletin board inside. Also, sometimes you can hear a girl’s voice…? (That’s probably Sothis, who we’ve already seen in the room.)

The last segment goes over the last of the Advanced classes. These are available upon reaching Level 20. The classes themselves were already covered by the official site (and are documented in our Classes page), but Famitsu provides some useful ability information.

Note: Class abilities are tied to class and disappear after class-changing.

Move Again: User can use leftover movement after combat.
Axefaire: Might +5 when an Axe is equipped

Bowfaire: Might +5 when a Bow is equipped
Bowrange +1: Increases attack range of Bows by 1

Swordfaire: Might +5 when a Sword is equipped
Locktouch: User can open doors and chests without a key
Silent Step: Less likely to be noticed by enemies

That’s all for today, but Famitsu promises that the next issue will be a “big blow-out”. To be honest, I wouldn’t expect too much. Most likely, it will be a big recap of everything we’ve learned up to now. Plus maybe a few new details sprinkled in. I’m pretty sure that’s how it’s usually been in the past.