Three Houses has only been out for a few days, but we already have our first major piece of merchandise news. 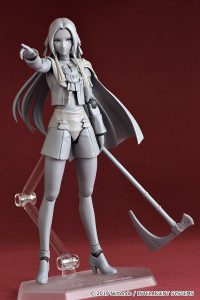 Good Smile Company  announced that they’ll be producing a figma version of Edelgard, the leader of the Black Eagles. Pictured is the prototype version, before it has been painted. Other Fire Emblem characters to receive figmas include Lucina and female Corrin.

This news comes from Wonder Festival 2019 (Summer), held on 28th July in Japan, where various new figures were shown off. Currently, no other details were provided, like a release date. But they did say that more details would be coming “soon”.