Today, a lot of news came to Summoners, possibly courtesy of Naga herself, or perhaps just a silly Intern-kun. Regardless of why we have the news, we sure have a lot of it. What, dare you ask? Well, read the header! A Feh Channel video was just dropped, completely out of the blue, highlighting upcoming events and rewards, as well as the new Lost Lore mode, and the Choose Your Legends 3 units, in all of their glory, both skills and stats, minus one skill…

Additionally, just a few hours before that, news on the next Legendary Hero was announced. Their announcement was not typical, as it was posted about in the app’s Bulletin Board, but removed shortly thereafter, presumably because it was posted ahead of schedule (which makes sense, given the date range that the banner will be running). Of course, as a Legendary Hero, present will be the usual batch of 8% summonable units. The Legendary Hero banner will run from August 28 until September 4. I’ll cover the Legendary unit, their Skills and incoming partner units at the very bottom of this article.

Feh’s Summer Celebration kicks off on August 2, celebrating exactly 2.5 years, by bringing back a bunch of rewards for Summoners, like new maps and revived GHB banners. That’s not all, as Feh shares news on a new gameplay mode, and the much anticipated Choose Your Legends 3 winners. Let’s quit the fluff, and dive right in! 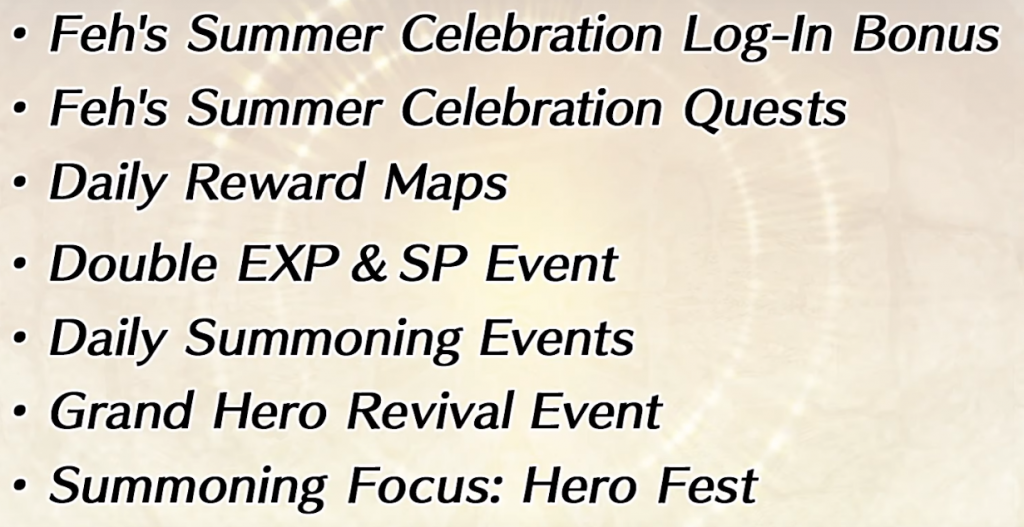 Much like the daily maps that come every now and again, new maps are returning, based on the recent popularity contest offered by the developers. These will bring about 10 maps, that offer an orb for each Normal and Hard mode completion. 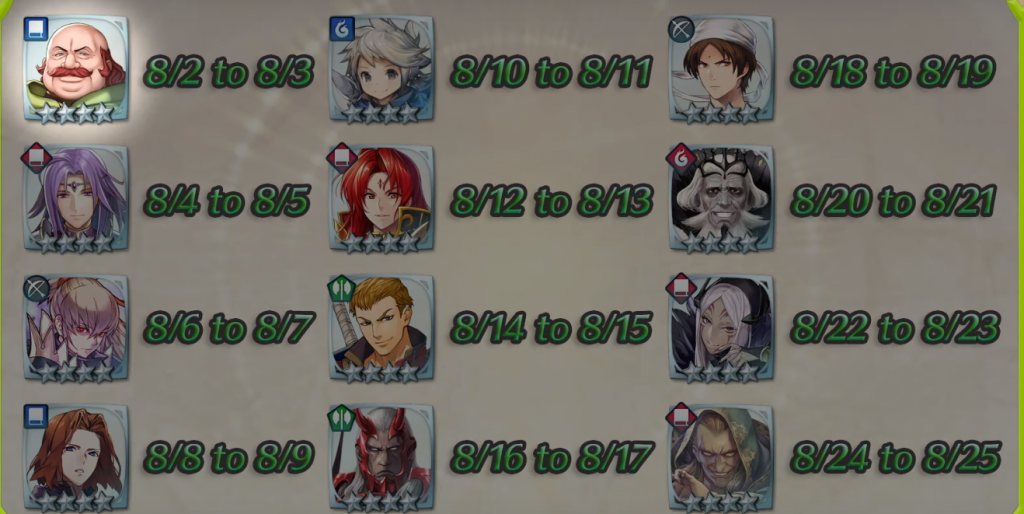 Listen in for Feh’s fantastic Oliver impression, at 2:27.

Grand Hero Battles are coming back yet again, featuring many rematches. Every two days (according to this schedule), is a GHB revival that offers up a GHB unit as a 4* reward for completion of their map. Save yourself some Heroic Grails, if you haven’t had a chance to, if you like any of these units and have not +10’d them yet.

We will be 2018 banners, returning in 21 glorious summoning sessions, for 21 days.

We’re also getting a new Hero Fest. bringing in Tibarn, Nailah, Surtr and Tiki (Fallen). This Hero Fest brings Heroes at a 5* summoning rate, a step up from the usual 3%.

Next, came the Lost Lore, a side story event. It kicks off with a World of Mystery Hero Saga, which brings about scouting missions for Heroes based on the map in which you choose. 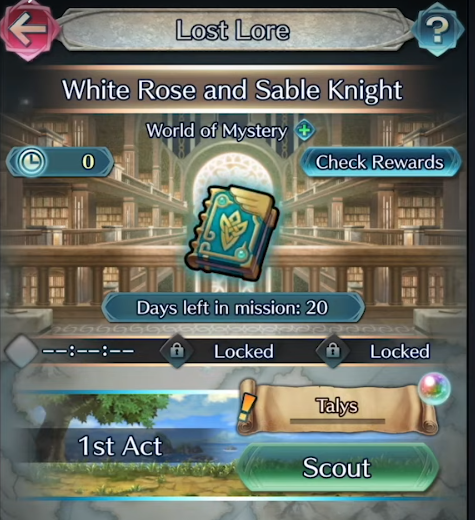 You may select up to two heroes, and heroes that have relationships with the game in which you’re sending them off to, will boost a gauge that accounts for what items (Orbs, Badges, etc) that they return with. 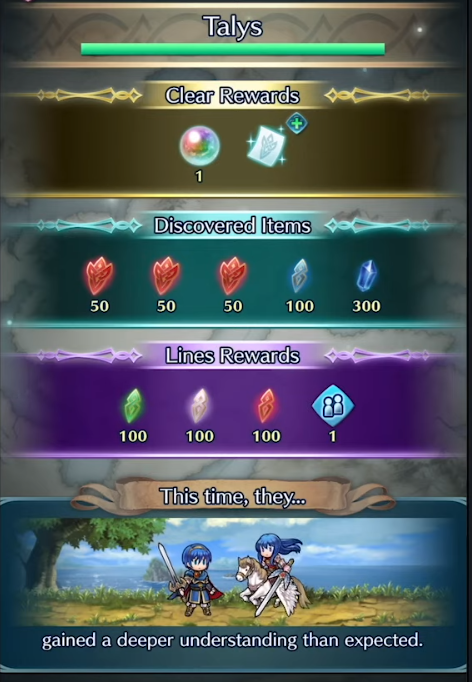 These trips are much like a typical dispatch mission in Final Fantasy Tactics games, in which your units return after X amount of hours.

As destinations increase, more rewards will come back. After completing several scout missions (4 in this example), a Strike mission will become available. These bring about stat unit boosts rather than a reward boost, for units deployed that tie in to the game they’re pulling from. 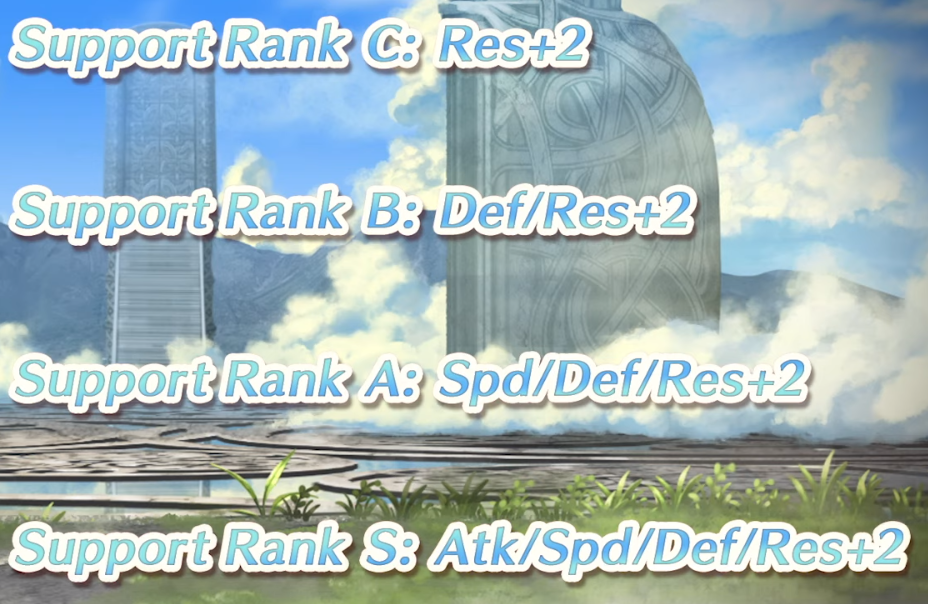 Additionally, units that share a Support with each other, will bring into it, additional stat boosts. Strike missions are still a scout mission, in case you were thinking otherwise. 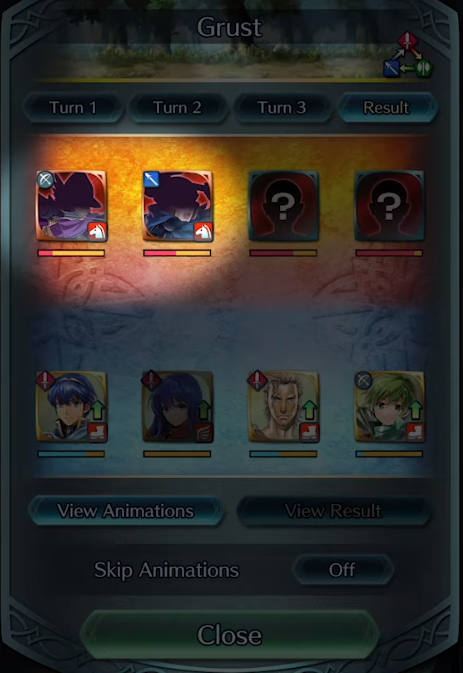 The reward for a Strike mission, however, brings back info on the mysterious opponents that your strike team faces.

Lore Lines (the clock icon) are related to the rewards point system, much like the 50,000 Tempest Trials+ completion points, and brings in placement rewards such as Dragonflowers, Orbs and Hero Feathers. It isn’t really shown if actual dialogue is part of the event.

Choose Your Legends round 3 heroes are finally announced. If you don’t recall, the winners include on the ladies’ side, includes the second place Camilla; Light of Nohr, the colorless queen, trading her axe for a staff, Snangridr, which comes packed with Dazzling and Swift Sparrow 2, as well as a Gravity debuff on her target and the target’s adjacent units. Along with her pretty mighty staff, she comes with the upgraded Atk/Spd Push 4, which boosts Atk and Spd by +5 if unit’s HP is at 25% or more, but deals 5 damage to herself after combat if she attacked. (Art by Yusuke Kozaki.) Also, to clarify, she still flies. Other shown skills include Restore+, Wrathful Staff and Atk Tactic 3.

Male’s second place unit is Eliwood: Marquess Pherae. Eliwood rides his horse in and brings his ceremonial garb as a lances, using Ninis’s Ice Lance, a lance that is effective against both dragons and beast units, whichcomes with a Spectrum boost of +4 on during player phase combat, as well as a flat +3 to speed. Additionally, he brings Swift Sparrow 3, which boosts Atk by +6 and Spd by +7 during combat. His player phase will be ferocious. Other shown skills include Rally Atk/Def+, Atk/Spd Ruse 3 and Spd Opening 3.

Ladies’ first place features Micaiah: Queen of Dawn, toting an improved Thani in Light of Dawn, a green tome that not only shreds Armor and Cavalry foes, but also adds stat bonuses to each stat that a foe has penalized on themselves, as well as an upgraded Atk/Res Bond 4, which boosts Atk and Res by +7 and neutralizes penalties to her own Atk and Res during combat. Can I just say that her guardian, a smiling Yune, makes her map sprite equally impressive as her weapon (Art by Senri Kita)? It makes sense, since she clearly inherited her flying movement type from Yune. That might explain her green color too. Other shown skills include Sacrifice, Ground Orders and a unique B-skill showing Yune in its icon.

Finally, the male’s winner, Alm: Imperial Ascent, gets his glory in a revised artwork based on his original, much like the recent Celica had in her artwork. He comes with the Dracofalchion, a sword that is effective against dragons, bestows +3 Atk and a similar to Laws of Sacae bonus, boosting all stats by 5 if the nearby ally count exceeds the opponent’s nearby ally count. Alm’s new A skill is Sendscale, which is sort of like Fury, in that it boosts damage dealt by 25%, and then deals 7 damage to Alm himself. Other shown skills include Draconic Aura, Chill Def 3 and what may be Threaten Atk/Spd 3? 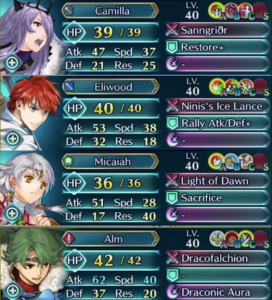 These CYL3 units are sure to please fans, as each brings a really powerful weapon and great A skill to either keep for themselves or pass down to fellow heroes. What’s sure to please fans even more is the free grab that comes traditionally with CYL heroes, letting Summoners pick a freebie for themselves, should their luck run a little bit dry. What are your thoughts? Mine are pretty much summarized as will I have enough orbs for this…

The incoming hero is, Julia: Crusader of Light. She’ll be a Blue Tome Infantry, with the Pair Up perk, and a whole set of announced skills. What’s most exciting about this, is that Julia is one of the only alts from the Judgral era, and specifically, the first alt from Genealogy of the Holy War. What’s more, is that her Earth blessing grants the Duel bonus, allowing score in the 180 BST threshold. That’s pretty big for arena-goers, having a power mage + dragonslayer that scores up in the tops of tiers.

Her batch of fellow 8% units includes: