Summoners can begin planning their orb expenditures for the pre-holiday season, as the new calendar for the rest of September, until October 9.

Here is some info on the events coming up until early October. As you can see, there is a lot of going on in the Fire Emblem Heroes game in September and October! #FEHeroes pic.twitter.com/Q6cthrEqBK

Of note to me, are the upcoming new Mythic Hero at the end of the month, the Heroes with Fierce Stance banner just before it (I can work on my Tiki again, finally!) and the next Forging Bonds. 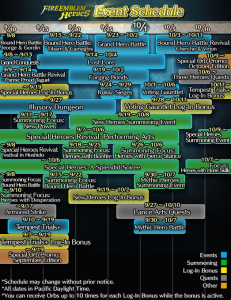 Be sure to save up your orbs for the incoming holiday units, starting early October and continuing until past the holiday season!