Fire Emblem Heroes will be receiving its first version update of the year during early January. Version 4.1.0 brings new weapon refinery options, more things to buy or level up, plus some minor fixes and adjustments.

Let’s begin with the highlight! The new weapon refines will apply to:

Elsewhere, the Dark Shrine (O) and Dark Shrine (D) Aether Raids structures will have their level cap increased to 5.

Meanwhile, the Concert Hall in the Aether Resort will be blessed with three new songs: “Silesse Castle Town” (from Genealogy of the Holy War), “Young Warriors” (from Path of Radiance) and “As Fierce as Fire” (from Three Houses).

10 compensation Orbs will be given out between the daily rollovers on 9th January and 23rd January (UTC). Presumably we’ll be getting Version 4.1.0 on 9th January or around then.

Furthermore, Cormag: Aloof Lanceman and Brunnya: Devoted General will be added to the Heroic Grails shop. 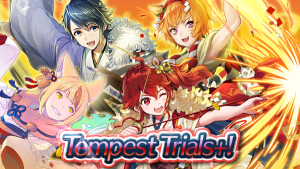 In other news, the Mid-fest Digest Tempest Trails+ event is now underway! Go grab yourself a New Year’s version of Eir, some nifty Sacred Seals and, of course, Orbsssss.

Also related to the New Year, Nintendo shared a cute little video featuring Alfonse and Sharena teaching Peony about the cultures of Japan, er… Hoshido. Or trying their best anyway!

In case you missed it, there’s currently a Skills banner featuring Heroes with Brazen skills. The Heroes with boosted rate are Adrift Mikoto, Ares and Fallen Tiki.