Heroes: Choose Your Legends 4 is upon us. Vote once each day for a week!

Choose Your Legends 4 is finally open for voting, and this time, there are a couple of quirks that Summoners may want to be aware of. 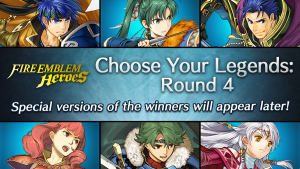 That said, voting begins now, and lasts until January 28. Votes can only be done once per day. If you miss a day, you missed your chance, so check daily!

To vote in the Choose Your Legends 4 event, click here or visit their site (linked below)