Welcome to the first installment of our weekly recap series of Series 20 of Fire Emblem Cipher, the Japanese trading card game. Launching as a new booster dubbed The Guiding Hand of Dawn, this set features characters from Fates, Path of Radiance, and Radiant Dawn.

In the weeks leading up to its March 19th release, the official Twitter account, @FEcipher, is revealing the latest cards each weekday, and we’ll be looking over them together as an overview of what’s to come! 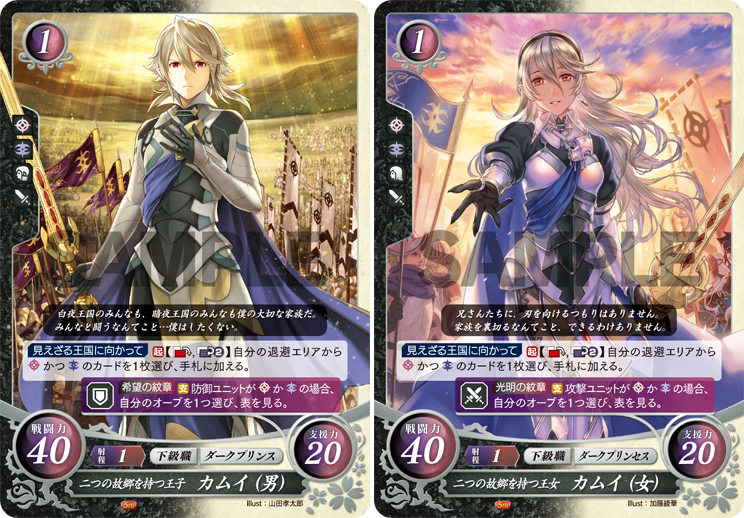 The first day introduced cards of both male and female Corrin, as well as Micaiah. They are lead protagonists in their respective stories, and are also the headlining characters of this particular set. You’ll also notice that Corrin appears as a dual-colored white/black unit for the first time in Cipher, a characteristic unique to the more recent cards of Fates characters based on Revelation.

Next, we got a look at a new card of Shigure. Through this, we also learned that even the Heirs of Fate saga will see representation in this forthcoming set. Note that this Shigure card is the first to be shown with the Hero Rare card rarity. 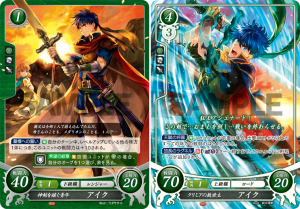 Following that, we were shown new cards of Ike, one of which was also revealed to be a Hero Rare. They’re both interpretations of story events which occur in Path of Radiance.

Afterwards, a new card of Ashnard was revealed. Avid fans of Path of Radiance may recognize that this is based on his chaotic appearance only found in the harder difficulty modes of the game.

Of note, Ashnard’s card text strongly suggests they will release a “Medallion” card. It hasn’t been properly introduced yet, but we believe this card artwork may belong to it (previously speculated to formally belong to Yune). 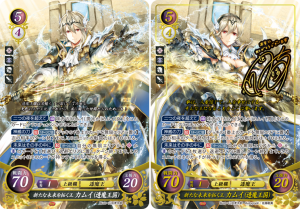 Lastly, Corrin as the new ruler of Valla was showcased as the first Super Rare card of the set. Previously unseen in the game proper, they make their grand debut in the Fire Emblem series exclusively in Cipher! The Super Rare Plus version of card, with female Corrin, is autographed by her voice actress Satomi Sato. 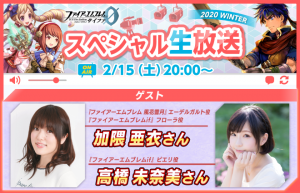 There’s more where that came from! Catch the next episode of FE Cipher’s two-hour livestream program on Saturday, February 15th at 3:00AM Pacific for more news on the TCG via YouTube or NicoNico.

Here’s where Cipher producer Ryota Kawade and Kubocchan from Intelligent Systems will be sharing more updates, together with Minami Takashi (voice of Alice from Cipher and Peri from Fates) and Ai Kakuma (voice of Edelgard from Three Houses and Flora from Fates). Look forward to our report after the show!

Fire Emblem Cipher’s next booster expansion set, The Guiding Hand of Dawn, will be available from Japan starting March 19th!