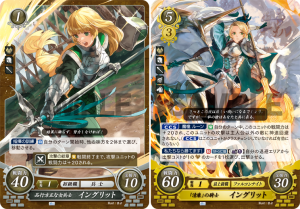 The first day introduced cards of Ingrid from Three Houses, appearing as a Soldier and Falcon Knight, the latter of which will be printed as a Rare card. Her aspiration to become an ideal knight across the years is captured by the artist Mayo. You’ll notice Ingrid gets to wield the magic lance, Lúin! 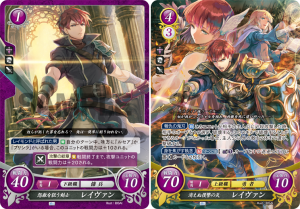 Next, we got a look at new cards of Raven from The Blazing Blade, who arrives at long last as his own Super Rare card. He was to be heir to the dissolved House Cornwell, only to learn Uther of House Ostia ordered its demise, thus stoking the flames of unquenched retribution in his heart. 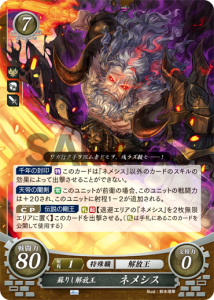 Following that, we were shown a new card of Nemesis from Three Houses. An important figure in ancient Fódlan history, his resurrection during the events of the Verdant Wind route shows how vicious he truly is in person! And now you can experience his chaotic might in the Cipher card game. 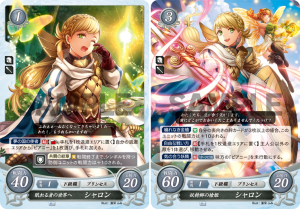 Afterwards, new cards were revealed of Sharena from Heroes. As this Cipher set is specifically focused on Book IV of the mobile game, it’s natural to see the rising star of the ongoing story be featured prominently along with Peony, in this case as a Rare card. Interestingly, Alfonse is nowhere to be seen yet… 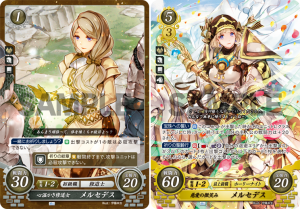 Lastly, new cards of Mercedes from Three Houses were showcased, one being a Super Rare card. Mercie has reached new heights as a Holy Knight! They can’t skip out on her close friend Annette too, right? Both cards are illustrated by Misei Ito. 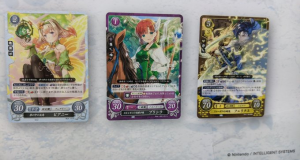 Earlier this week, the Fire Emblem Cipher office started distributing their advertisement posters for the new set to card shops, offering us a sneak peek at a few extra cards. As of now, we can learn about new cards of Peony, Rutger, Shamir, and Felix thanks to photos provided by @Akibagrapan on Twitter.

And that wraps up this week’s recap! Check back here next week for another round-up of Cipher news.