At the beginning of the game, players create a playable Avatar (“My Unit” in the Japanese version), who serves as one of the game’s main characters alongside Chrom.

Choice between Male or Female. Affects your Avatar’s appearance and determines which characters they can marry. 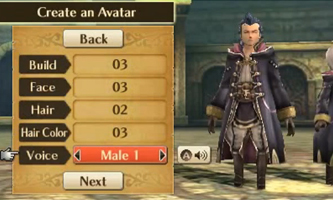 For each gender, you can choose from 3 builds, 5 faces (per build), 5 hairstyles (per build), 20 hair colours and 3 voices. The appearance options are reflected in your Avatar’s 2D portrait, map sprite and 3D battle model; for some sample Avatar appearances, please check this page.

Your Avatar’s voice is used to determine their voice during combat, as well as their manner of speech in the dialogue. (In the Japanese version, there are 5 voices, including a “silent” option–picking this reduces your Avatar to a classic silent protagonist.) 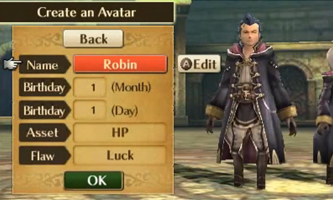 Your Avatar always begins as a Tactician, but they can use a Second Seal to change to almost every regular class. 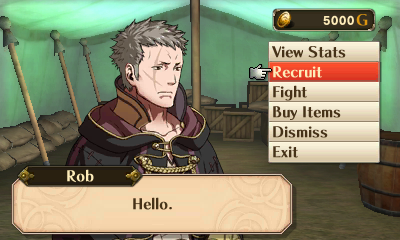 You can recruit other player’s Avatar via StreetPass. Additionally, you can register your Avatars in the “Avatar Logbook” and summon them to other save files. These Guest Avatars are treated as bonus characters, like the legacy characters, and thus cannot support.