Double Duel (“Dual Tag” in the Japanese version) is a Local Play co-op mode where two Awakening players team up to fight computer-controlled opponents in a 2 vs 1 knock-out competition. 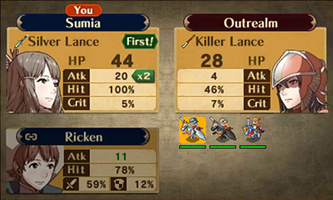 The Double Duel mode can be accessed via the Wireless menu, when outside of battle. Solo players should be warned that 2 players are requiredto play this mode.

Players choose 3 characters each and face off against a team of foes, one foe at a time, in an arena-style battle (not on a battle map). Only 1 character per player participates in the battle, with the other characters remaining in standby until they’re called in. The player characters fight paired up; each player takes turns as the Lead unit and Support unit, with the Support unit providing assistance in the form of Dual Strikes or Dual Guards (see the Dual System for further details on this subject). The host player acts as Lead unit on odd-numbered turns, while the guest player takes over for even-numbered turns.

During the course of the match, weapon uses are not reduced and any friendly characters who fall in battle will still return at the end of the match. Characters cannot change weapons during a match and any adjustments to characters must be done before the match. The characters’ Speed statistic determines who gets to attack first during each turn–if the Lead unit is faster than the enemy, they will get to attack first and vice versa. After successively defeating an enemy, all friendly characters recover 5% HP and any fallen characters are revived with 1 HP before facing the next enemy.

The following Skills are negated in Double Duel, either because they offer no use or because they’re too powerful: Lethality (enemies can use this though), Galeforce, Lifetaker, Relief, Renewal, Bond, Indoor/Outdoor Fighter, Despoil, Armsthrift, Discipline, Veteran, Paragon, Aptitude, Locktouch, Pass, Acrobat, Deliverer and all Rally Skills. Despite there being no map involved, tile-based Skills such as Demoiselle and Anathema still apply.

When all enemies in the team have been defeated, both players will obtain an item and Renown as rewards. When the going gets tough, players may yield and obtain a bit of Renown for their efforts.

Additional Double Duel challengers can be unlocked through SpotPass.