When connected to the internet, players can purchase the paid downloadable content (DLC), which includes new maps and episodes. The DLC is not required to complete the game, but is geared towards players seeking a deeper game experience. 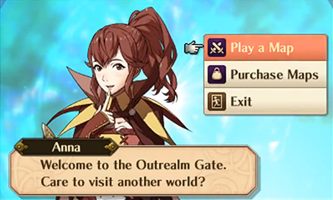 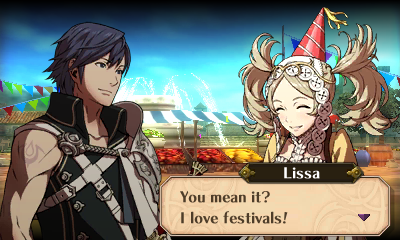 The DLC episodes can be accessed any time after completing Chapter 4, by venturing to a lone island to the far south of Ylisse, where the mysterious Outrealm Gate is located. Beyond this gate lies Anna–the gate’s keeper and the player’s connection to other-worldly adventures. The available commands in the Outrealm Gate are: Play a Map, Purchase Maps and Exit.

Each episode in the first series typically pits your trained units against the Einherjar–summoned characters from Fire Emblem history (in other words, legacy characters). Upon completion of an episode, you will usually obtain a legacy character with new artwork drawn by a guest artist and sometimes a DLC-exclusive item too.

In case you’re curious, the legacy characters you fight in the DLC episodes can all be obtained via SpotPass (although often with a different class and stats).

Notes: Episodes marked “New” are the latest episodes revealed on the official site. Rewards highlighted in red are characters.

Exclusive to the North American and European versions, players can purchase packs of DLC maps for a discounted price. 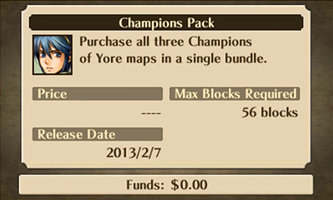 For example, the “Champions Pack” contains all three “Champions of Yore” episodes and costs $6.00, while it would cost $7.50 to purchase the maps separately. The DLC packs may contain episodes yet to be released; players can view unreleased episodes in the Outrealm Gate, but can not play them until they’re released.