Players can acquire Renown, which may be exchanged for rewards via the Wireless menu, when outside of battle. 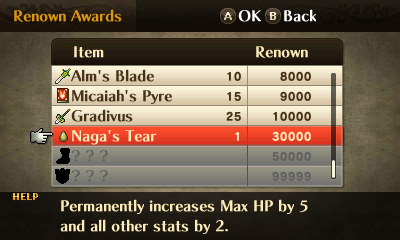 How to Obtain Renown

When starting a new game with a completed game file available, you carry over the highest Renown of your completed game files. Note that if you gain Renown in a file that’s been completed, the game doesn’t count your new Renown for transfers until you complete that file again.

The easiest way to obtain Renown is to repeatedly hire cheap SpotPass Teams. The DLC episode “The Golden Gaffe” is useful for obtaining the funds for such an endeavour.