Through StreetPass, players can create a StreetPass Team and exchange data with other Awakening players. After exchanging data, other players’ StreetPass Teams may appear on your world map and you can meet and battle with them at your leisure.

If you’re unsure of what StreetPass is, please take a gander at Nintendo’s official explanation.

After enabling StreetPass functionality for the game, you can automatically exchange StreetPass data by simply placing your Nintendo 3DS into sleep mode (exchange of data may also occur at other times). Then just walk around until you bump into other Nintendo 3DS players! You don’t even need to have Awakening in your 3DS’s game slot, so long as you don’t erase its StreetPass entry from your 3DS.

To create a team, go the Wireless menu when outside of battle and click on the “StreetPass Team” option. 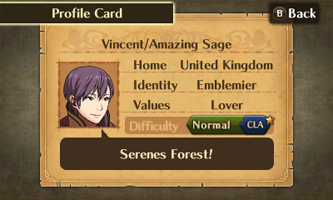 Your team can consist of up to 10 characters from the main story or any bonus characters obtained from DLC, SpotPass or StreetPass (see warning below). You can edit your team’s name, create a greeting message (like “Hello.”) and change your profile for other players to see. When you’re finished, press the “Sortie” button to save your team configuration and send it away to other realms!

Note that if any changes have occurred to your team members (e.g. if they’ve gained levels or you’ve changed their equipment or Skills), you will need to “Sortie” again to update the changes.

Warning: In the North American and European versions, including legacy characters (from DLC or SpotPass) in your StreetPass Team prevents your team from showing up in other player’s games. 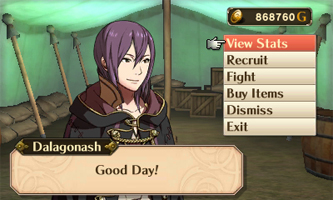 The available options when you meet another StreetPass Team

Either way, upon coming into contact with the team, you can Parley with them, triggering a screen not unlike the one shown above. For reference, the available options are the same as for encountering a SpotPass Team.

View Stats: Self explanatory. Useful if you want to battle the team.
Recruit: Persuade the other player’s Avatar to join your team with shiny gold. The amount of gold required scales with the unit’s stats.
Fight: Battle the team at the current location. If you win, you can recruit the other player’s Avatar for free. If you lose, you lose your characters, just like a normal battle.
Buy Items: Purchase any of the items possessed by the team. You can only purchase one of each item, even if the team has multiple. Certain items can not be purchased (see table below).
Dismiss: Make the team leave the world map permanently.
Exit: Return to the world map.

When battling StreetPass teams, the enemy units will be controlled by the AI. The unit’s abilities also rise according to the difficulty level.

After fighting, recruiting or buying items, the team will disappear until the next time you StreetPass the same player.

The guest Avatars that you recruit are treated as bonus characters in the same vein as the legacy characters; as such, they cannot build support relationships.

Items That Cannot be Purchased