Around July 2008, the webmaster of the Fire Emblem Universe website, Arch, managed to obtain detailed information about a number of Fire Emblem prototypes (Genealogy of the Holy War, Thracia 776 and Binding Blade) from an online contact, Memento Mori. The information originated from a girl whose father allegedly worked as a programmer for Intelligent Systems (the series’s development team). This girl collected notes about the prototypes over the years, saved as PDFs, albeit written in poor English, with some words left untranslated in Japanese (which is entirely understandable, given that the girl was Japanese).

No screenshots were given and, to this day, it is probably impossible to verify whether the information is true or false. Still, since there remains a chance that the information could be true, it serves as a useful resource as to what the games could have been like. Initially, the intent was to keep this information a Fire Emblem Universe
exclusive, however Arch has kindly allowed the information to be hosted on this site as well. Below, you will find my interpretations of the prototype notes and you can also read Arch’s version (for all three games) here.

(The details here have yet to be confirmed!) 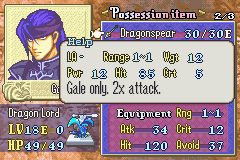 This screenshot is not real.