The Book of Valentian Revelations is an in-universe record of Duma and Mila’s history, which is divided into numerous chapters. 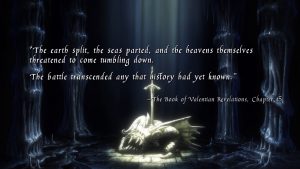 Some of these chapters can be found in the stone tablets in the amiibo dungeons, while one of the chapters appears in the game’s debut trailer (shown above).

The remaining chapters are included in the Valentia Accordion, a book released in Japan on 30th March 2018.

Below is a collection of all 40 chapters. Special thanks to Kirokan for scanning the Valentia Accordion.

To those who seek the truth of the Valentian gods, we impart this Book of Revelations to you.

We are the Servants, borne from our master’s will, watching over this continent alongside our master.

Brother Duma and sister Mila: both Old Folk, and known as divine dragons in the land beyond.
(Official)

Long ago, the Old Folk created a kingdom in the land beyond.

The Old Folk, led by the ruler of the divine dragons, ushered in an age of prosperity.

Duma protected the dragons’ ruler with his military might, gaining her favour; he was called the Kingshield.

Mila blessed the land with her magic, paving prosperity for the Old Folk; she was called the Kingsgrail.

The Old Folk bestowed many gifts to the New Folk who were young of the world.

These gifts included knowledge of fire, iron, alcohol and sorcery.

The New Folk rapidly advanced thanks to the Old Folk’s wisdom. Eventually, they constructed an extravagant city known as Thabes.

Fearing that the New Folk had amassed too much power, Duma sent soldiers into Thabes.

After 3 long days of battle, the city of Thabes was obliterated and the survivors fled the ruined land.

The ruler of the divine dragons, in her great anger, exacted harsh judgement on Duma.

Duma clashed violently with the ruler of the divine dragons.
(Official)

Mila joined Duma’s side and the two stood valiantly against the ruler’s army.

The earth split, the seas parted, and the heavens themselves threatened to come tumbling down. The battle transcended any that history had yet know.
(Official)

Duma and Mila were no match for the ruler’s forces and surrendered after 9 terrible days of battle.

During the colossal battle, some of the ruler’s fangs splintered and scattered across the realm.

By the ruler’s decree, Mila and Duma were banished from the land beyond.

The ruler of the divine dragons was merciful, so before Duma departed, she gave him one of her own fangs, the Kingsfang.
(Official)

Falchion was the name given to the blade carved from the Kingsfang. It was a sword of beginnings, an incarnation of the ruler herself.
(Official)

Those who carry the divine dragon’s blood and bear her mark can draw out the Kingsfang’s true strength and manifest their royal power.
(Official)

After being exiled, Duma and Mila traveled across the ocean for 7 days before finally alighting here on this continent.
(There is an official version, but this version is slightly different.)

Duma and Mila chased their ideals on this continent that they now called home.

Despite being scarred by battle, Duma’s rage had not subsided and he desired revenge against the dragons’ ruler.

Duma ordered his people to erect an oppressive tower atop a mountain facing the land beyond, to which Mila approved.

Here in our land, Duma sought power to surpass all others, whilst Mila sought peace and love. Their paths diverged, never to meet again.
(Official)

Though Duma’s ideals were originally driven by revenge, he also put his people into consideration.

Duma with his unquenchable lust for battle clashed with Mila who stood in opposition.

A war broke out that sundered land and sky; no living thing was safe. The peals of thunder rang like an elegy sung by Mila herself.
(Official)

But despite clash after heated clash, not once did Duma turn the Kingsfang upon his sister.
(Official)

Countless seasons passed and the war showed no signs of end.

At the end of an arduous battle, Duma and Mila had exhausted their strength.

Together, Duma and Mila formed a Divine Accord. Thereafter, they vowed never to cross into each other’s domain.

One day, interlopers from the ocean threatened the people of this continent.

Duma and Mila became the peoples’ pillar, while they resisted against the foreign threat.

The fighter Rigel, from Duma’s domain, and the hero Zofia, from Mila’s domain, were chosen for their brilliant exploits.

Duma and Mila bequeathed their divine blood to the two champions, and brought prosperity to their respective nations.
(Official)

And so, this continent embraced a long-lasting era of peace.

One day, Duma and Mila are fated to descend into madness. When that day comes, an era shrouded by darkness shall befall this continent.

From the moment we were borne, we witnesses of history shall guide the lost, so you may bathe in a thousand years of prosperity.