Just like in Gaiden, you can can unlock the Sound Room by pressing Up, Down, Left, Right, Up while on the title screen (where it says “Press Any Button”). The unlock is only temporary though.

Silver in the Grass

You can cut down grass in dungeons with Alm or Celica’s sword and sometimes you may find Silver Marks or other items. In particular, you’re bound to find at least 3 Silver Marks from the grass in most Sacred Springs.

Kliff and Faye in Celica’s Party

At the beginning of the game, you can opt to not recruit Kliff and Faye. If so, during the very end of Act 2, you can speak to Kliff and/or Faye with Celica to recruit them to her party.

(No other characters can be recruited in this manner, although there is different dialogue for Silque, Forsyth and Python if you skip them.)

Alcoholic provisions (Ale, Leftover Ale, Wine and Ram Wine) cannot be consumed by anyone. However if you offer them to a Mila Statue, it will restore Mila’s Turnwheel to prime condition.

(As an aside, it was originally planned that characters over 20 could consume these items. However this was changed during development, possibly so characters under 20 weren’t handicapped.)

In this game, there is no Dancer or similar unit that can restore another unit’s turn. However if Faye promotes to Cleric, she can learn the “Anew” spell at Level 14 Saint, which has the same function.

(If you promoted Faye to a different class and regret it, you can use a Villager’s Fork to return her to a Villager.) 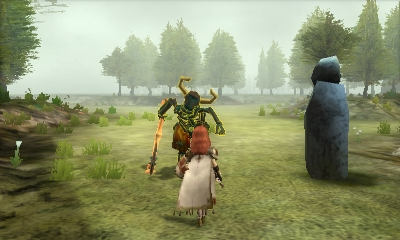 If you keep re-entering dungeons, there’s a 10% chance that rare monsters will spawn. You can identify them by their sinister yellow glow and the huge enemy indicator on the dungeon map.

Although Alm and Celica have their own separate inventories, you can deliver items to the other party by speaking to a traveling merchant. Each merchant can send one item and only once, so choose wisely.

Hint: If you want to complete all the sub-quests, you may want to send the Rion Shield to Alm’s party.

Many weapons can only be (easily) obtained by forging existing weapons to a certain level and evolving them. Most notably Celica’s special weapon, the Beloved Zofia.

Outside of DLC, the only place to reliably farm Gold Marks is by cutting down the grass in the Sacred Springs found on floor B9 of the Thabes Labyrinth.

There is a 1/6 chance of finding a Gold Mark and normally you will find 3 items on your first visit, then 2 on your second and finally 1 on your third. Therefore allowing you 6 chances per journey to the labyrinth.

(Which isn’t a lot, so make sure to think hard before spending your Gold Marks.)

This hidden area can be accessed by heading directly east from Rigel Falls on the world map. Inside, it’s easy to find Entombed to train your weaker units.

Normally you cannot attack Jedah due to his Duma’s Gift skill. However, your attacks will be unimpeded during every 4th combat. For example, if you attack with Celica, Mae, Boey and Saber, Saber will be able to inflict damage.

These rare weapons can be found as random drops only (with very low rate).

Additionally you can find them by breaking pots and boxes in floors B9 and B10 of the Thabes Labyrinth or the Astral Temple/Inner Sanctum. This is probably the easiest way, but you still need luck on your side.

Once you’ve beaten the game, you will unlock the Sound Room and Theater.

Also, if you load your clear save data, you will begin Act 6, which features a few post-game maps and a new dungeon, the Thabes Labyrinth.

During this time, Alm and Celica’s parties (and inventories) will be merged and you can change the “main hero” by picking the “Switch” option from the world map menu.