The Private Quarters is an area in My Castle that serves as the Avatar’s makeshift home. Here, you can change the Avatar’s hairstyle or invite allies to improve relationships.

Allies can be invited once per afternoon and night. Any non-guest character can be invited, but only allies with a “heart mark” will gain support points.

At the beginning, only 3 random allies will display a heart mark. Once you’ve upgraded to Level 2, the number of allies with heart marks will increase to 6, then 9 after upgrading to Level 3. 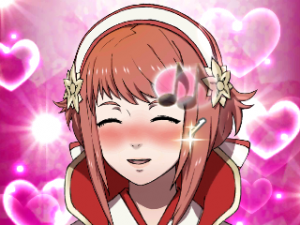 In the Japanese version, you play a face-rubbing (aka “skinship”) mini-game with the character you invite. The character’s face appears on the bottom screen and you must carefully stroke it with your stylus to increase the gauge.

However, due to cultural differences or other reasons, the North American version skips the mini-game entirely and advances straight to the character’s special dialogue instead.

If your Avatar has reached a S support level with a character, a new “Bond” option will appear. By selecting this option, you will invite your S support partner in a similar manner to the “Invite Ally” option.

However, unlike “Invite Ally”, no support points are gained. Instead, after each session, you will fill up one small heart. Then once you have filled 10 small hearts, 1 big heart will be filled.

After meeting certain milestones, new events or rewards will be unlocked.